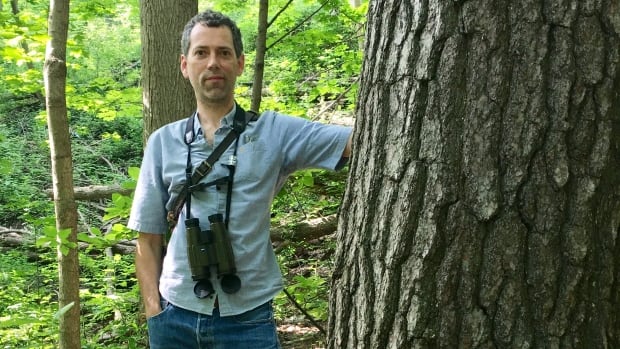 ‘We’re losing them’: Man campaigns to save native species in Toronto ravines

Determined to save native species from Toronto’s ravines, Eric Davies, a doctoral student in forestry at the University of Toronto, launched a campaign. It’s about lobbying the city, gaining support from other foresters and bringing public attention to the problem of invasive species, which pose the greatest threat to Toronto’s ravines.

With science, money, political will, the support of tens of thousands of local residents and a team of foresters spearheading the effort, Davies says he firmly believes the ecological integrity of Toronto’s ravines could be restored. He calls his plan “Rewilding”.

During a recent walk in a ravine near downtown Toronto, Davies pointed out the non-native trees. Dead trees were strewn across the wooded area. There was trash and invasive species had taken hold.

Species such as white pine, Ontario’s provincial tree, are declining in Toronto ravines. This survivor, near Sherbourne Street and Bloor Street East, stood upright, its canopy extending well above the forest floor. Davies says he thinks the tree is around 100 years old. He calls it a “treasure” and a “very valuable tree”. Removing invasive species near its base could help it regenerate naturally, he says.

“The thing about these trees, you don’t realize, is that our descendants won’t see these trees that big,” he says. “We lose them.”

Ravines make up almost 17% of Toronto’s land mass, or about 11,000 hectares, and Torontonians love them. Sixty percent of Toronto’s ravines are on public land, with 40% on private land. The city’s Ravine Strategy, adopted in October 2017, is based on five guiding principles: Protect, Invest, Connect, Partner and Celebrate. There is no money attached to the strategy yet.

A public-private partnership could begin to solve the problem

A public-private partnership, a cooperative arrangement involving the public and private sectors, is the answer to the problem, says Davies. It could be designed after the Natural Areas Conservancy of New York, a non-profit group. It could also tap into the resources of the Toronto and Region Conservation Authority (TRCA).

“The problem is so big that the only thing that can solve it now is to use private funds to help build capacity for the city, the TRCA and all those people who want to help,” he says.

Davies says some “excitement” around the ravines is also needed.

If left unchecked, the ravines that run through Toronto will continue to be invaded by invasive species such as Norway maples, Japanese knotweed, strangler vine and garlic mustard. The ravines will become silent, green deserts that do not support native insects, birds and mammals.

Eventually, invasive species will reach a critical mass where they will stabilize and it will be extremely difficult to dislodge them, he says.

“Once you’ve let an invasive species reach a threshold, it can be very, very difficult to get rid of it. We want to try to keep it from reaching that critical mass,” Davies says. “If you get into this stuff now, it’s possible to master it. You still have the power of nature here to go with you. If you just get rid of the weeds, like a garden, they’ll come back. The hard thing is once all the local species reach a low level Even getting the genetic material is a challenge.

A walk in a ravine reveals the extent of the decline

While walking through a ravine along Rosedale Valley Road between Sherbourne Street and Bayview Avenue, Davies spotted sugar maples, black walnuts, red oaks and white ash trees, all native species in decline. He also pointed to a linden and a diseased butternut tree. The latter is one of two endangered tree species in Ontario.

There was an alternate leaf dogwood, a shrub native to Ontario, with many pods, in the middle of a slope. All the native trees and shrubs, however, were overshadowed by the masses of invasive species, especially Norway maples.

An area of ​​the ravine was clearly used as a dump. There was a full white trash bag, a discarded laundry basket, half-slope blue recycling, lots of dirty clothes, a used needle, and lots of empty amber plastic pill boxes.

Davies has support for his county ravine restoration plan. Mike Colle, representing Ward 8 Eglinton-Lawrence, and Robert Wright, Dean of the Faculty of Forestry at the University of Toronto.

Colle says the plan is the only way the town can save its ravines for future generations.

“Right now, we’re just walking on water. We’re barely making it. But if we don’t create a new, invigorated model to very proactively protect and conserve our ravines, we’re going to lose the battle. We will either be smothered by garbage or smothered by invasive species,” Colle says.

“It’s going to take a much bigger and wider public effort to turn the corner here. We’re really at a crossroads. The public is kind of lulled into a false sense of security because they see all this green. But they don’t realize that most of that green is an invasive species that’s smothering out all the other native plants and it’s going to continue to do that.”

Colle says the board has been beset by one financial crisis after another due to provincial government cutbacks and hasn’t had time to focus on other issues. He himself set up a “Save our Ravines” organization to rally people across town to embrace the local ravines. He still plans to lead walks in the ravines.

Wright, for his part, said Toronto takes its ravines for granted. “We definitely support any strategy to preserve our ravines,” he said. “Ravine restoration is a goal of urban forestry.”

However, not everyone supports the idea of ​​a public-private partnership.

Council passed a motion in February calling on the city manager to report on the feasibility of establishing a ravine reserve. The council said the reserve could engage the public, solicit public and private donations and raise the funds needed to address the “ecological threats” facing the city’s ravines. A report is expected this fall.

Com. Shelley Carroll, representing Ward 17 Don Valley North, voted against the motion. She wants the city to fund her ravine strategy and take ownership of it.

“We made a plan. We should fund it,” Carroll says. “I strongly believe that the reason we kept our ravines is to keep public ownership and management. I really don’t want to let the public sector off the hook.”

As for Toronto Mayor John Tory, his spokesman Don Peat says the mayor is committed to protecting and improving the ravines. He says city staff are working on a ravine strategy implementation plan that considers different partnership models. These include partnerships with foundations, “friends of” groups and communities who want to take care of ravines in their neighborhoods.

“Partnerships in our ravines will help increase engagement and contribute to our ravines in a sustainable way,” Tory said. “Staff are currently reviewing the merits of public-private conservancies in our ravines and any benefits over other partnership models. The Mayor looks forward to the results.”

The city, meanwhile, is already working in partnership with the TRCA, landowners and utility providers to protect and maintain the ravines, according to Jane Arbor, spokesperson for the parks, forestry and recreation division. from the city. The city spends about $10 million on green management. Much of this sum is spent on forest management in natural areas, mainly ravines.

Arbor says the ravine strategy is supported by what the city calls a “stewardship model.” This means that “volunteers participate in planting, maintenance and monitoring activities through events organized by the city in partnership with local community groups and through the city’s stewardship program,” a she declared.

But Davies says if Toronto’s “deep, narrow, wooded valleys” are to remain healthy, the city needs to do more and soon.

Is there a renewal of the Socialist Party in Spain? – Vicente Navarro