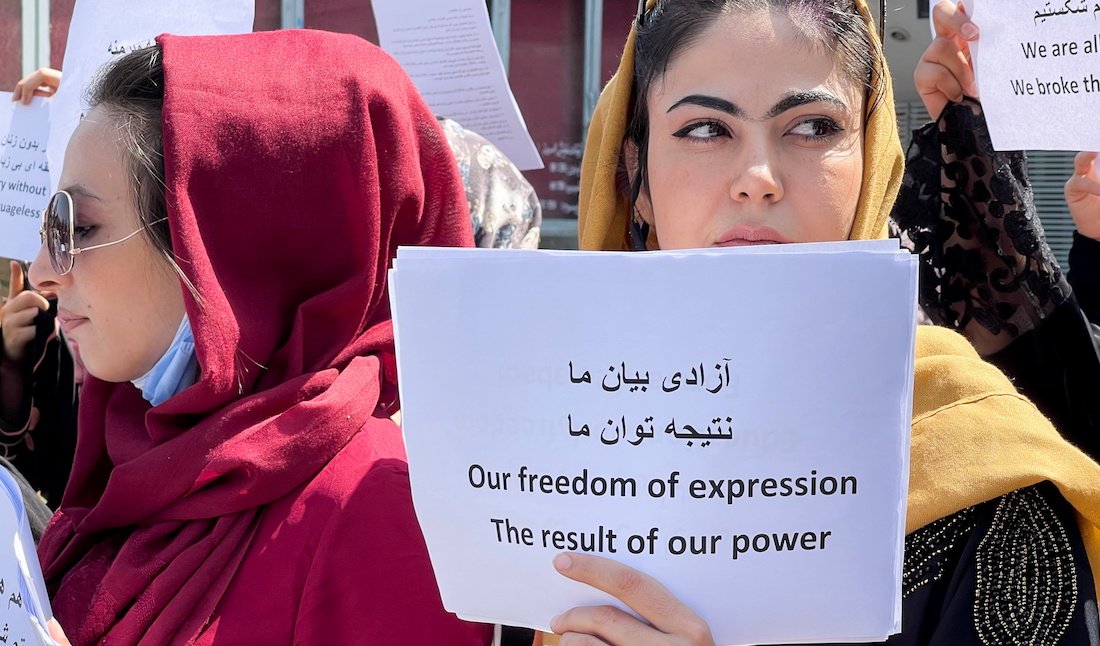 Women’s rights defenders and Afghan civilian activists demonstrate to call on the Taliban to preserve their achievements and education, outside the presidential palace in Kabul, Afghanistan September 3, 2021. REUTERS/Stringer

After the fall of the Afghan government in August, many supporters of democratic rights were unable to fly or chose not to leave their country. You’ve probably seen the pictures of women, supported by young men, who challenged the Taliban regime in Kabul within days of taking power. Today, many of these resistance fighters are hiding with their families, their lives being in great danger from the fundamentalists.

For many years, the Freedom Socialist Party (FSP) has been in contact with some of these Kabul radials and feminists. We know the difficulties they face. If they ever needed your help, it’s now.

That’s why I’m asking you to give generously to the Solidarity Fund for Afghan Progressives and Feminists. We want to raise at least $2,000 as quickly as possible. Every penny will be sent to Afghanistan. Click here to donate.

Among the anti-Taliban militants we have heard of is the organization called Left Radical of Afghanistan (LRA). The LRA is part of a group of progressives, labor advocates, feminists, secularists and socialists who have jointly launched a publication titled Eteraz, Where The protestation, in January 2020.

The protestation was the only revolutionary publication in Kabul standing against the US and NATO occupation, the Ashraf Ghani regime, the Taliban and other extremist Islamic groups. For a year and a half, it has been widely distributed among workers, women, students and teachers in most of the country’s 34 provinces.

This came to an abrupt end with the return of the Taliban, which unleashed a reign of terror against their opponents.

The reality is that there are hundreds of people on the left – Marxists, revolutionaries, workers, secularists, democrats and feminists – who lack security, basic necessities and the ability to earn a living. Hunger and poverty weigh on them. You can make a difference.

Recently, The protestation The staff said that, although living in hiding, they intend to start publishing an online edition in the near future. And we know that feminists in Kabul will continue to fight for women’s rights however they can, underground if necessary.

Now is the time your donation can have a real impact. It can save lives, buy necessities, keep people in touch with each other, and help The protestation the staff survive to fight another day.

The freedom fighters in Afghanistan are counting on us. As the LRA wrote to the FSP in a recent appeal:

The radical left of Afghanistan and other progressive activists sincerely urge all Marxist, socialist, anti-imperialist, anti-war forces, women’s rights defenders, feminists and secularists to express their solidarity with the progressive forces of Afghanistan by their political and financial support in these difficult times and urgent circumstances. We count on trade unions, leftist and progressive parties, and peace-loving people in Australia, the United States and Canada.

The distribution of the Covid-19 vaccine is a disaster