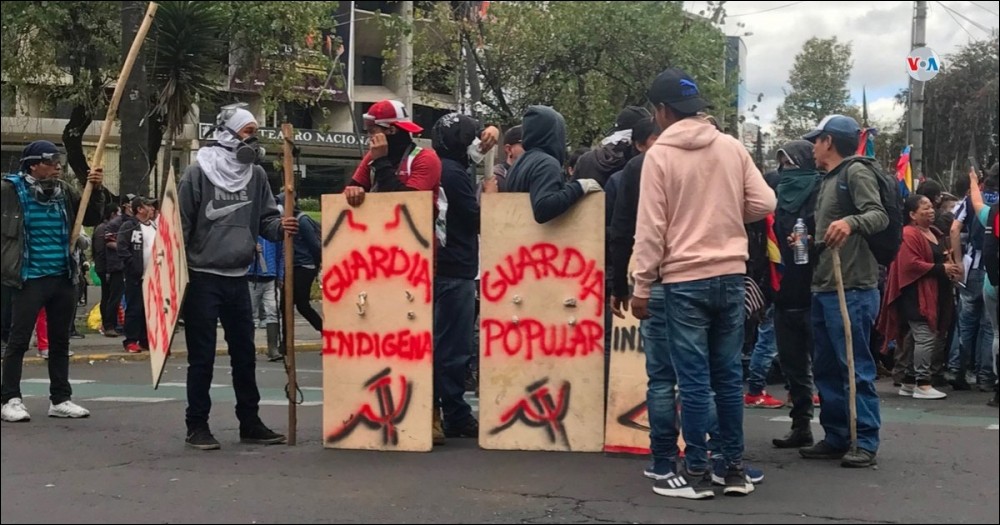 Tony Saunois, secretary of the Committee for a Workers’ International

Twelve days of mass protests forced the Ecuadorian government to step down and restore the fuel subsidies it cut with Decree 883.

In what was a revolutionary movement, the indigenous peoples of Ecuador, under the banner of their largest organization, the Conaie (Confederation of Nationalities of Ecuador), united in a mass movement uniting all sections of the working class and the middle class.

A massive general strike called by the main trade union federation, the UGTE (General Union of Ecuadorian Workers), was joined by tens of thousands of peasants and rural workers from Conaie.

The role of the working class and indigenous peoples was at the center of the struggle. They united, rejecting separatism. The indigenous peoples of Ecuador represent at least 25% of the population and have played a central role in past struggles.

The immediate cause of this uprising was the savage austerity plan that Lenin Moreno’s government introduced. An IMF aide, he obediently followed their demands to end fuel subsidies and launched attacks on workers’ rights in return for a $ 4.2 billion “bailout”.

Overnight fuel prices have soared over 150%. State employees have seen their right to thirty days of annual leave reduced from half to fifteen days.

Transport unions responded with a call for a protest strike. This was followed by continuous protests – a real uprising, with the call for a general strike.

This movement had many powerful elements of a pre-revolutionary or classic revolutionary situation: the ruling class was divided and considerably weakened; the working class and the poor have shown a determination to fight; the middle class was not only neutralized but actively participated in the movement; splits and divisions have opened up within the state apparatus, with sections even joining the protests.

However, the crucial factor, the idea of â€‹â€‹a socialist alternative, of a revolutionary program and party, has yet to develop and build. Without it, the potential victory of the masses in transforming society will be threatened and lost.

The brutal crackdown – which has resulted in more than 500 arrests, hundreds of injuries and a few deaths – has been met with defiance by the masses. In many clashes, workers and indigenous peoples, armed with sticks, stones and, in some cases, improvised rocket launchers pushed back the police and the army.

According to information from TelesurTV (the media channel launched by Hugo Chavez in Venezuela), indigenous organizations have created a “Parlamento de los Pueblos” (People’s Parliament).

The mass movement forced the government to flee the capital Quito. The working class and indigenous peoples stormed the National Assembly and were potentially challenging power.

Elements of dual power have unfolded. However, the masses did not move to seize power and destroy the old regime. Although the regime has been forced to back down on subsidies, only the replacement of capitalism with socialism can offer a future for the Ecuadorian masses.

We must learn the lessons of this struggle. A program of socialist revolution would have involved:

Moreno was previously the country’s vice-president and ally of the radical ex-left Rafael Correa who was president for a decade (2006-17).

Correa came to power as part of the “pink revolution” that swept through Latin America at this point. He was a close ally of Hugo Chvez in Venezuela and promised a â€œcitizen revolutionâ€.

Radical popular reforms have been implemented, including a massive increase in state spending on health and education. Correa also introduced higher taxes on capital and capital controls, and at one point refused to pay the â€œillegitimate itemsâ€ of foreign debt.

However, despite these popular measures, Correa, like Chvez, failed to take the necessary steps to break with capitalism. Once the economy entered recession, reforms were rolled back and cuts were introduced.

There has not been the construction of real democratic control by the working class and the oppressed. His regime was imprisoned by staying in a capitalist economy and deciding on measures from above.

The failure of the break with capitalism lost this opportunity. But a working class victory in Ecuador could once again present such a prospect and begin to challenge imperialism.