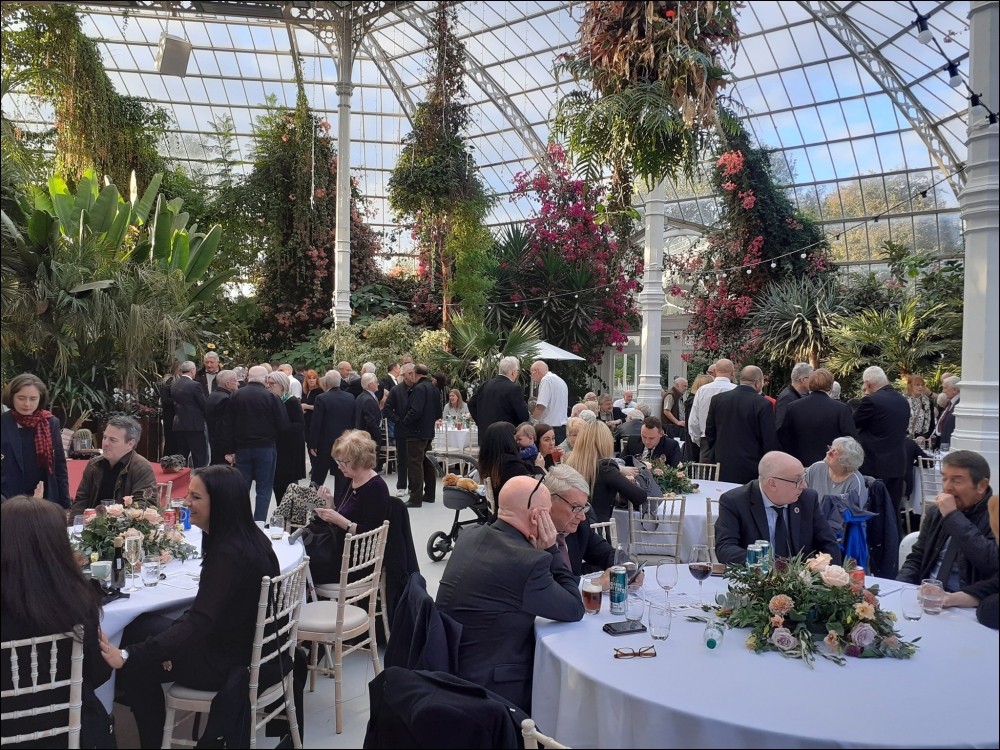 Theo Sharieff, youth and student organizer of the Socialist Party

Hundreds of people filled the pews and aisles of the Unitarian Church in Sefton Park in Liverpool on October 21 to pay homage to Tony Mulhearn.

For five decades Tony was a longtime supporter of the Militant and member of the Socialist Party, and a leading figure in the 1983-87 Socialist City Council that defeated Thatcher.

Tony was a giant of the workers’ movement in Liverpool and Britain. Glancing around the service it looked like a mass meeting of the labor movement – there were banners from unions including PCS and Unison, local union councils, the Socialist Party and others.

Over 700 people came from all over Liverpool and the country – as many as they attended the meetings of the Liverpool District Labor Party delegates when Tony was its chairman!

Touching speeches were made by Tony’s children throughout the day, as well as by Derek Hatton, who was a militant supporter and deputy head of this Liverpool labor council.

Speeches by members of the Socialist Party, as well as the delicate account of Tony’s qualities as a loving friend and father, served as a reminder of Tony’s unwavering commitment to the cause of the struggle for a socialist world.

Peter Taaffe, General Secretary of the Socialist Party, delivered the eulogy at the request of Tony’s family. He spoke not only of Tony’s heroic role in Liverpool’s fight against Thatcher, but also of his tenacity to fight for key ideas of the militant and the Socialist Party until the very end of his life, which made him has earned as many enemies as it has friends along the way. .

Dave Walsh, a member of the Liverpool Socialist Party, explained what Tony’s struggle meant to a working-class boy like himself who grew up in Liverpool in the 1980s.

The entire establishment, including the capitalist press and the right wing of the Labor Party, despised Tony for the stance he and others took against Thatcher’s austerity program. But Thatcher’s defeat by Tony and the activist meant Dave had an apprenticeship and a decent future growing up in Liverpool.

Tony was a Marxist and a true working class intellectual who helped translate socialism into the language of jobs, housing and services for thousands of poor and working people in Liverpool.

The speeches recalled the inspiration Tony is, and will continue to be, for the working class and young people of Liverpool and beyond. They illustrated why so many people beyond Tony’s family and close friends had come to say goodbye to him.

Saying goodbye to Tony was heartbreaking for his family and for all who were lucky enough to have met him. But it was hard not to feel inspired after listening to what Tony had done with his life.

His story, and the history of the Militant in Liverpool, will undoubtedly inspire a new generation of class fighters who will stand in this tradition, fighting with determination and patience for a socialist future, free from capitalism, poverty and poverty. ‘injustice.

CWU strike vote will build confidence to fight back

Get rid of Boris and his bosses deal. General election now!

Eliminate Racism From Football – Take Back The Game!

Minimum wage: what should be demanded?

Marion Lloyd for the general secretary of the PCS union

NEU members strike against cuts to funding for the sixth

China at a crossroads: 70 years since the declaration of the People’s Republic of China

Chile: a surge of rage against the capitalist system

Solidarity with the Kurdish people

Join the party that dares to fight for socialism

Socialism 2019: Join us for a festival of ideas

What way forward for workers and youth in Nigeria?