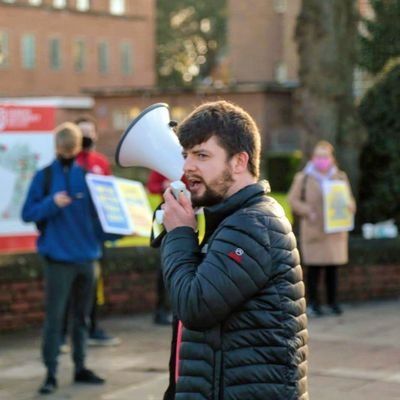 Unite the Union leader Neil is currently involved in wage and condition negotiations in various sectors including transport, education and manufacturing. It is possible that a week of widespread industrial action will take place later this month.

“It could almost end up being a mini general strike, especially with the transport and education sectors,” he said.

Originally from South Belfast, Neil has lived in the Ormeau and Carryduff areas. He says the Socialist Party has a strong presence in this part of town.

“We have a very strong branch in South Belfast so it was a natural place for us to introduce ourselves,” he said. “We are running two candidates in this election, myself in South Belfast and Amy Ferguson in Tyrone. We are putting the standing marker of two trade unionists. We believe this will be a very sectarian election. Against the backdrop of the overall political landscape , with Sinn Féin vying to be the biggest party and battles between Unionist parties, we believe the temperature of bigotry will rise and we have seen examples of this before.

I host our @SocialistNI public meeting tomorrow Wed 04/06 at 7 p.m. at the Clayton Hotel on Ormeau Avenue alongside @MickBarryTD and @1977susan Please share widely and if you can do it let me know: https://t.co/kVQ9DFGSPq pic.twitter.com/Bsxop4YaiG

Neil said it was important that the Stormont parties were challenged on their records.

“We want to lay down an important marker for the labor movement and for young activists that there must be a left-wing cross-community socialist challenge to the executive parties in Stormont, who have acted shamefully towards working people. We saw it recently when the Alliance defeated the Freedom of Association Bill and the Green Party failed to show up.

“Stormont left out the voice of workers. I was a hotel employee and the current pandemic has left the industry in terrible shape. Attention has been paid to business owners in this sector, but the voices of the workers who help make this sector work have fallen on deaf ears. We want to challenge the pro-corporate, pro-profit and anti-worker actions of the Assembly.

Neil also promised that he would not take his full salary if elected and would instead take the average worker’s salary while demanding pay rises for all workers.

“If elected, I will take the average salary of a young South Belfast worker and the rest will be donated to community projects and hardship workers. Council workers and NHS workers have received a pay rise of miserable pay, while last week Stormont handed himself a £500 pay rise with a clear majority and he is deaf to what ordinary working people face.

“The cost of living has skyrocketed with inflation hovering around 8.2%. Bills have skyrocketed and bosses have scrambled to keep wages low. The answer to this is that workers need to organize to that we can raise wages.In November of last year, Glen Dimplex went on strike and won a 13.5% wage increase, and we need to see more of that as big companies post record profits.

“We need more than these Martin Lewis money management tips to help lower the cost of living. A small grant here or a loan against your energy bills there won’t work, we we need more action and pay rises, for the minimum wage to be at least £15 an hour and the lifting of restrictions on workers organizing and we need to see caps prices on energy bills and rents Rent control is strongly linked to the ability to control inflation and it is a step that the new executive must take.

The Socialist Party also plans to tackle public housing and rent controls, which Neil says will benefit workers and prevent people from being overpriced by converting houses to apartments.

“Private property is a huge problem in South Belfast, rent increases across Northern Ireland over the last year have been around 5%, but in South Belfast we have seen increases of 25-30%.We are seeing real estate speculation and landlords converting houses into apartments for Airbnbs.There is also a lack of social housing.There are lots of properties and empty spaces, but they are not used for housing.

The Socialist Party candidate claims Stormont has failed to do what is necessary to address the climate emergency. And on the lack of a strategy to address gender-based violence, he said: “There is a pandemic of gender-based violence. We have seen a sharp increase in spikes and sexual assaults against women and non-binary people. There have been attacks on women in Holyland, Ormeau Park and Lisburn Road and this needs to be spoken about and addressed as Stormont still lacks a strategy to tackle violence against women.

Do you have anything to say on this issue?
If so, why not send a letter to the editor via this link?

The diversity of bees is important for maintaining