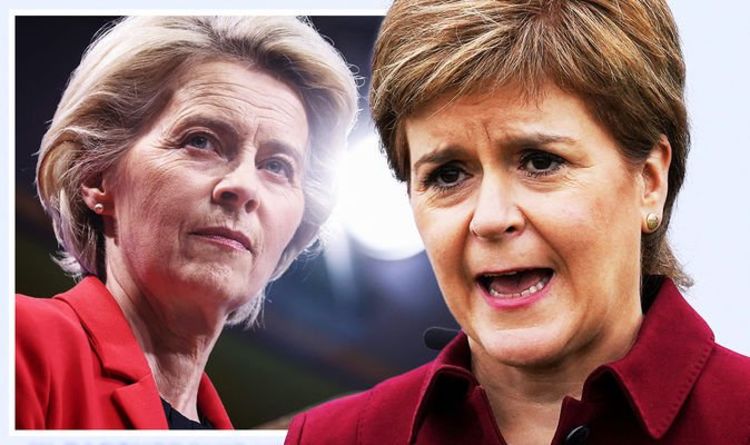 The SNP and the Scottish Greens have released details of their new power-sharing deal, which includes a pledge to hold another independence vote over the next five years. Energy was a key part of the first battle for independence in 2014, as Scotland enjoys one of the most favorable conditions in Europe for harvesting wind. At the time, the government argued that it saw no reason to justify continuing to cost-share a single integrated market and said the arrangement “could not continue in its current form”.

But as the Scottish Prime Minister hoped to join the EU, experts at Edinburgh’s Napier University said in March that green energy would “be of particular mutual interest” to the pair and could allow Scotland to sit at the block table.

They noted that Scotland’s wind power production could “be diverted to supply the EU with green power” in what appears to be a masterstroke from Ms Sturgeon.

But Chris Stark, chief executive of the UK Climate Change Committee, told Express.co.uk that there is a major obstacle.

He said: “There is currently no connection between mainland Scotland and Europe except via England.

“That could change in the future, but it’s hard to know until there is an agreement to build a piece of transmission that crosses the North Sea.

“There is no potential to export this electricity directly.”

The expert said that “we could see” the export of hydrogen and “certainly” the expertise of the oil and gas sector.

Mr Stark added: ‘It’s very different from the scramble for oil we saw in 1970 in Scotland – it’s a different kind of transition.

“I don’t know if Scotland will export a lot of energy.

The pro-independence Greens have endorsed most of the Scottish Government’s policy, but there are likely to be huge areas of disagreement.

The two men said they would hold a referendum on Scottish independence “during the current parliamentary session on a specific date to be determined by the Scottish Parliament”.

Their intention would be for the referendum to take place in the first half of the five-year parliamentary session.

In May, the London School of Economics and Political Science (LSE) announced it would hit the Scottish economy “two to three times” harder than Brexit.