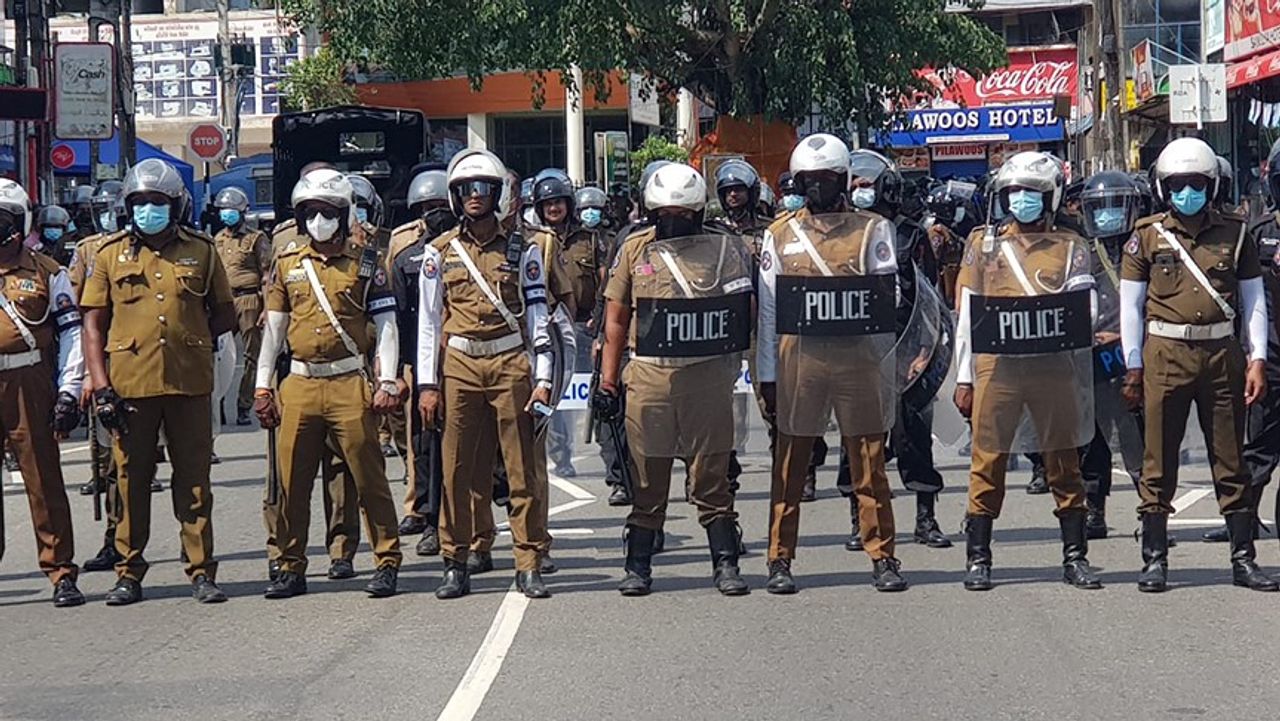 The Sri Lankan government of President Ranil Wickremesinghe intensified its witch hunt against anti-government protesters last week with police raids on the Frontline Socialist Party (FSP) headquarters in Nugegoda, a suburb of Colombo.

According to FSP education secretary Pubudu Jayagoda, a team of police, including 10 plainclothes officers and one in uniform, raided the party office around 7:30 a.m. on Friday. The party members present opposed any search of the premises and requested a search warrant. The police did not respond or even identify the police station they came from, but broke into the premises, searched the party materials, ransacked the shelves and left.

At 8:10 a.m., a second police team of about 30 uniformed officers arrived at the FSP office. They claimed to be from the nearby Mirihana police station and said they were looking for Wasantha Mudalige, head of the Inter-University Student Federation (IUSF).

When party members asked for a search warrant, police showed a magistrate’s court arrest warrant for Mudalige who was active among anti-government protesters occupying Galle Face Green. Again, the police ignored the opposition of the FSP members, searched the premises and then left.

The raids are a flagrant violation of the democratic rights of the FSP and a warning to the Sri Lankan working class as a whole. They are part of a growing wave of repression unleashed by President Wickremesinghe’s government aimed at crushing any anti-government opposition.

The Socialist Equality Party (SEP), despite its fundamental and well-known political differences with the pseudo-left FSP, opposes and condemns Wickremesinghe’s undemocratic and repressive police raids against this organization.

After being named interim president, Wickremesinghe, a pro-American right-wing puppet, officially declared a state of emergency on July 17, giving himself the power to deploy the military to arbitrarily arrest and detain people, suppress demonstrations, outlawing organizations, seeking private property and imposing censorship.

His first act after being undemocratically installed as president by the discredited Sri Lankan parliament was to sanction a violent police and military operation on July 22 to expel anti-government protesters from the presidential secretariat. Security forces attacked and injured scores of protesters and arrested nine. Those arrested were released on bail by a magistrate that evening amid widespread popular outrage.

These attacks continued with the arrest of around two dozen people, including some of those who led months of protests in Galle Face Green demanding the resignation of former President Gotabhaya Rajapakse and his government. After Rajapakse fled the country, the protesters changed their slogan to “Ranil go home”.

Police are now collecting “evidence” – CCTV footage, photos and fingerprints at locations occupied by protesters, including the presidential palace, the prime minister’s official residence and the presidential secretariat – in preparation for mass arrests. Fingerprints were sent to the international airport to arrest anyone attempting to leave the country. Photos of “suspects” have been published in the media with calls for more information to be given to the police.

Last weekend, the Sunday time quoted an unnamed senior government official, who said that “the government is considering the outlawing of any group, organization or political party that engages in acts of violence, the use of undemocratic methods in an attempt to seize power or take control of state buildings”.

The newspaper also reported that the Ministry of Public Security had “seeked legal advice on the possibility of banning any organization or political party that aids or encourages such activities”.

In order to justify the escalating crackdown, Wickremesinghe and members of the government have escalated their vile slanders against anti-government protesters.

Addressing MPs and government supporters in Kandy on Saturday, Wickremesinghe said, “We are dealing with fascist terrorism right now. Under cover of protest, many groups of people burned homes and vehicles and destroyed or stole state property.

What a dirty insinuation! It was Wickremesinghe and his government, along with the former Rajapakse regime, who unleashed police and military attacks on protesting workers, youth and rural poor, demanding basic necessities – food, medicine and fuel – and other basic needs of life.

As he steps up state repression, Wickremesinghe is trying to finalize an International Monetary Fund (IMF) bailout deal and its associated austerity measures, including wage and pension cuts and mass job destruction in the public sector.

In an effort to gain political legitimacy for these draconian measures, Wickremesinghe seeks to establish a multiparty government. On Friday, he wrote to all opposition parliamentarians, saying that “a program must be implemented with the participation of all political parties represented in parliament, expert groups, civil society organizations and of all parties involved to successfully overcome the challenges ahead”.

Several opposition parties, including the Sri Lanka Freedom Party, responded favorably. The Tamil National Alliance and Samagi Jana Balavegaya have indicated that they are ready to negotiate the formation of a multi-party caretaker government. The Janatha Vimukthi Peramuna called for a snap general election to impose “political stability” and a regime to “revive” the economy.

Regardless of their tactical differences, these parties all agree on implementing the IMF’s austerity program and restoring “political stability”, i.e. suppressing all mass social opposition. to the catastrophic and worsening social conditions faced by the Sri Lankan masses. .

While condemning the police raids against the FSP, the SEP warns that the pseudo-left party has no fundamental differences with the call for a multi-party caretaker government and maintains close ties with the various opposition parties .

Addressing a press conference following the raids, PSF leader Pubudu Jayagoda said no major country or institution had helped Sri Lanka because the Wickremesinghe government was not ” legitimate government…[and] has no plan” and “is trying to use military power to stay”.

In other words, the FSP opposes the Wickremesinghe government but not its regressive economic and social program which will greatly intensify the hardships facing the workers and the masses. His opposition to Wickremesinghe is that he does not have the legitimacy and the international position to implement the austerity program necessary to obtain “help” from the IMF and the major powers.

The FSP harbors the illusion that a capitalist caretaker government formed with the opposition parties and without the widely hated Wickremesinghe can be pressured into concessions.

No amount of protest or appeal to the Wickremesinghe regime, or any future caretaker government, will solve the life and death issues facing the working class and rural masses, let alone the defense of democratic rights.

What is urgently needed is the independent mobilization of the working class mustering the support of the rural poor for a revolutionary socialist program. This is described in the July 20 statement of the PES, “For a democratic and socialist congress of workers and rural masses! Such a congress, he says, is “a revolutionary political alternative to the reactionary capitalist interim government put in place by the discredited parliamentary cronies of Gotabhaya Rajapakse and Ranil Wickremesinghe.”

In order to build support for such a congress, we call on workers and the rural masses to set up their own action committees, independent of all capitalist parties and unions, in every workplace, plantation, neighborhood and rural area to fight for their class interests. Such action committees will provide means to defend the democratic rights of the masses.

At the same time, we say that real democratic rights can only be achieved by fighting for socialist demands, including the nationalization of banks, big business and plantations under the democratic control of the workers, and the seizure of power from the corrupt and venal ruling elites.

The struggle for a “Democratic and Socialist Congress of Workers and Rural Masses” will provide the basis for advancing the struggle for a workers’ and peasants’ government. The SEP calls on workers and youth to take up this political battle as part of the broader struggle for socialism in South Asia and internationally.

What epilepsy teaches us about diversity and resilience