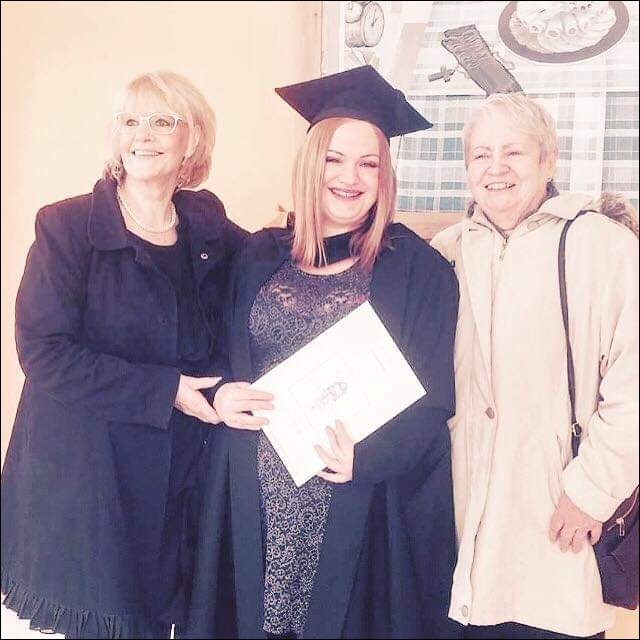 Excerpt from The Socialist newspaper, January 12, 2022

Pauline (right) with her granddaughter, Charlotte Spencer, member of the Socialist Party (Click to enlarge)

It is with great sadness that we learned of Pauline Wall’s passing after a long battle with cancer. Despite her pain, she retained her outward exuberance and faith in Marxist ideas, and was always helpful and cheerful to the end.

Pauline was one of the oldest supporters of the Socialist Party, joining our then group ‘Socialist Fight’ in 1959. She was active in the Kirkdale Labor Party in Liverpool.

She had been in contact with our ideas before that because she was connected to Beryl Deane, who was our political education organizer in the youth section of Walton Labour. Beryl was part of the large Trotskyist Deane family. Pauline attended these meetings as it was the only regular meeting of young people on Merseyside.

Pauline quickly joined the editorial board of the monthly magazine’s youth section Rally, playing an important role in its production and the writing of reports.

She was never afraid to take on and plead the political cause against the Tories, the Labor right and even leftist MPs, always armed with the facts.

Pauline Knight married Pat Wall. He was Liverpool’s best-known Marxist. He had been the youngest Labor Party constituency secretary in the country in the early 1950s, until he had to do his military service in the army.

Pauline and Pat’s house has become a welcome center for activists from the local labor movement. They were responsible for consolidating the support of several who became key figures in our party.

Among them was Ted Mooney, a member of the Liverpool Socialist Party, who was then part of the 1960 apprentice engineers strike. I also remember that the Socialist Party’s political secretary, Peter Taaffe, came from Birkenhead to his first meeting branch there.

Pauline and Pat had to move because of Pat’s job. First in Market Harborough, then in Yorkshire.

Supporters of Militant, now the Socialist Party, succeeded in getting Pat elected President of the Bradford Trades Union Council and then in 1982 selected as the Bradford North Labor Party’s candidate in the next general election.

The right wing of the Labor Party encouraged the media to carry out an ignoble campaign, which Pauline paid the price for in their house and at the school gates. The press dogs knocked on the door, looked through the mailbox, walked around the house looking out the windows.

It was at the height of Militant’s witch hunt. Peter Taaffe explains in ‘The Rise Of Militant’: “Pauline was forced at home to abide by the National Union of Journalists’ ‘Code of Professional Conduct’ in a failed attempt to prick the conscience of the hounds of Fleet Street who persecuted her. , Pat and the family”. Pauline heroically overcame all of this.

Although the Conservatives won the seat in 1983, thanks to the Social Democratic Party (SDP) taking votes from Labour, Pat won the 1987 general election.

Pauline then faced a period nursing Pat when he fell ill, no doubt contributed by the stress placed on them. Pat died in 1990. Even two days after his funeral, two right-wing Labor advisers walked into his committee room and told his poll worker and secretary to go out with their belongings.

Although she was ill, Pauline found old photographs for my memoirs until a month ago.

She and Pat leave a legacy of a tradition of fighting for the working class movement, and some family members support these ideas and the Socialist Party. We extend our sincere condolences to all their family, comrades and friends.

There will be more in future issues of The Socialist on the role Pauline played in building the labor movement in Liverpool.

The super-rich get richer, while we can’t make ends meet. Join the response!

Energy price crisis: Nationalize the energy giants to save us a £600 hit

Kazakhstan. The workers’ revolt is suppressed only by a massive mobilization of troops

Solidarity with workers protesting in Kazakhstan

Communities fight back against Rio Tinto mine

North London NHS – ‘It will be us who save him’

Southampton student vote for online exams must be accepted

Don’t Look Up: An Entertaining Satire on Corporate Power and the American Establishment

Anne: Hillsborough and the Fight for Justice

Bullying at the weigh room culture at races