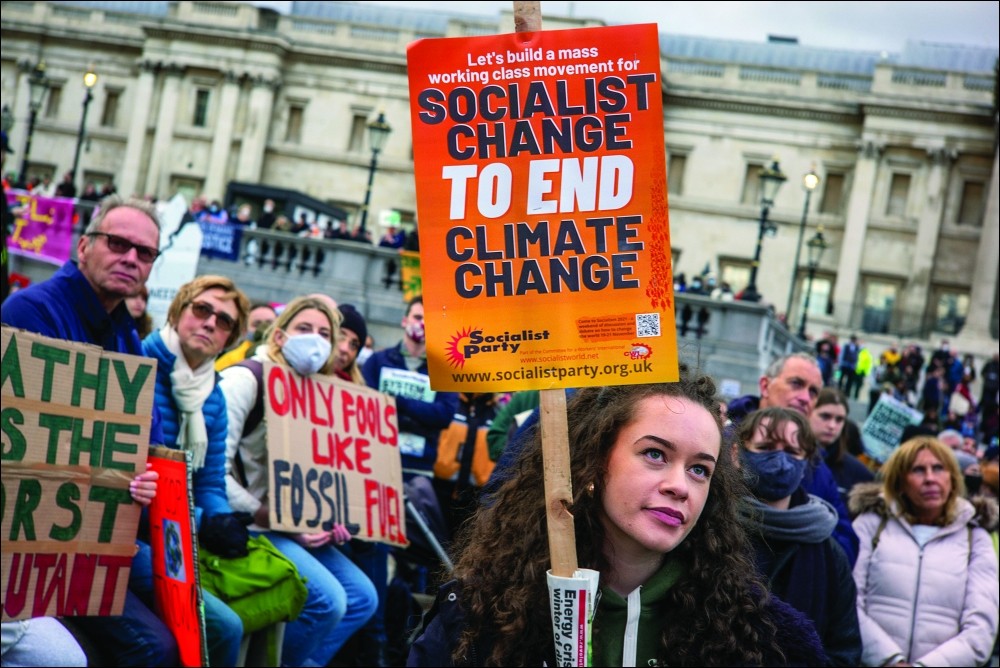 From The Socialist newspaper, November 10, 2021

COP26 is a week away at the time of writing, and a set of commitments and agreements have been made between many capitalist nations of the world. Sadly, and as might be expected, none of them will succeed in solving the climate crisis, even if the promises are kept.

The fossil fuel industry has the largest delegation at the top, more than any individual country. This immediately sets the tone. The giants of the industry are there to pretend to be sincere in the face of climate change.

Over the past few months, we’ve seen them continue decades of work to block and change climate change legislation and reporting. Even weeks before COP26, coal and oil producers tried to water down an assessment by the Intergovernmental Panel on Climate Change (IPCC).

The agreements that will emerge from this event will have been submitted to the approval of the same bosses and bankers who still subsidize the destruction of the planet.

The summit’s first major deal was 110 leaders pledging that their nations would end and reverse deforestation by 2030. This is an important goal in tackling climate change because trees absorb huge amounts of carbon dioxide, but this has already been tried.

A 2014 declaration promised to halve forest loss by 2020; it did not meet this target and deforestation has increased since. Many more countries have signed this new agreement, including Brazil, whose far-right leader Bolsonaro is no friend of the environment. His reign led to a sharp increase in rainforest destruction, peaking at twelve last year. Why is he so eager to sign such a spectacular deforestation pledge?

The main factors are probably the luck of getting a share of $ 19.2 billion with the pledge, and the fact that, like other pledges at COP26, it is unenforceable.

But donors don’t have an easy way to tell if deforestation is actually reduced. Without being able to verify that countries keep their promises, donors risk parting with less money. Despite all the commitments, deforestation remains beneficial to both legal businesses and illegal loggers who operate in the larger forests. The registration does not commit Brazil and the other countries.

The next headline for COP26 was a ridiculous pledge from Indian Narenda Modi, another right-wing leader trying to act environmentally. He proclaimed that India will have net zero emissions – by 2070. That’s 20 years after the IPCC asked to ensure global temperatures do not exceed 1.5 degrees.

It has also pledged to install 500 gigawatts (GW) of renewable energy capacity by 2030, but India already had a target of 175 GW of renewable energy production by 2022. It currently stands at around 100 GW, which puts it behind its current target. Meanwhile, the International Energy Agency (IEA) claims 20% of India’s energy currently comes from renewables, disputing India’s official figure of 39%. We cannot therefore expect the third CO2 emitter to come close to its targets. The results of COP26 look grim at this point.

India was not among the 40 countries that signed the summit’s coal pledge, nor the two other largest contributors of CO2, China and the United States. This pledge aims to anything but end coal-fired power by 2040. India and China burn two-thirds of the world’s coal, so the pledge looks pretty redundant even if those who signed on hit their targets .

Methane was the other headlining fossil fuel as the second most harmful greenhouse gas. The Global Methane Pledge is an initiative of the United States and the EU and has not been signed by China, Russia or India, which are the three biggest contributors to methane emissions. Russia’s emissions increased 32% last year. The pledge itself only calls for a 30% reduction in emissions, so the question arises as to whether this will reduce methane emissions at all!

The IEA has stated that even if all the commitments made are kept, we will still reach 1.8 degrees, which will have a much bigger impact on life than 1.5 degrees. With the biggest and most daring pledges that seem to have already been made, COP26 has failed.

The failure of capitalism

The promises and unworkable deals made at COP26 rely on funding flowing around the world to spend and invest in massive economic change. The point is, capitalism falls short.

Globally, wealth and technology exist to seriously tackle climate change and to help cope with its effects already underway. But capitalism cannot make the necessary changes because the investment is made to maximize profit, in competition with other capitalists, to the detriment of everything else. Governments at the international level, representing the interests of their own capitalist class, are not prepared to make decisions that affect the profits of the bosses. The global collaboration needed to save the planet is not possible under capitalism.

Therefore, socialist change at the international level is vital. Public ownership and democratic control of banks and the biggest polluters would give the working class itself the power to put the planet ahead of profit. Investments could then be planned to develop new technologies to improve people’s lives and the environment. Only a socialist world can save the planet from a climate catastrophe.

Let’s fight together for a raise

Council Employees Vote On Salary Offer That Is Truly A Cut

Conservatives under pressure to try to remove triple pension lockdown

Sleaze and pay a toxic mix for preservatives

Why I am coming to Socialisme 2021

Fall of the Portuguese government: the left must adopt a new course

John Barnes on Classes and Capitalism. What is missing ?

Designers must “equip nature with the diversity of waste it needs to work its magic faster,” says Jalila Essaïdi