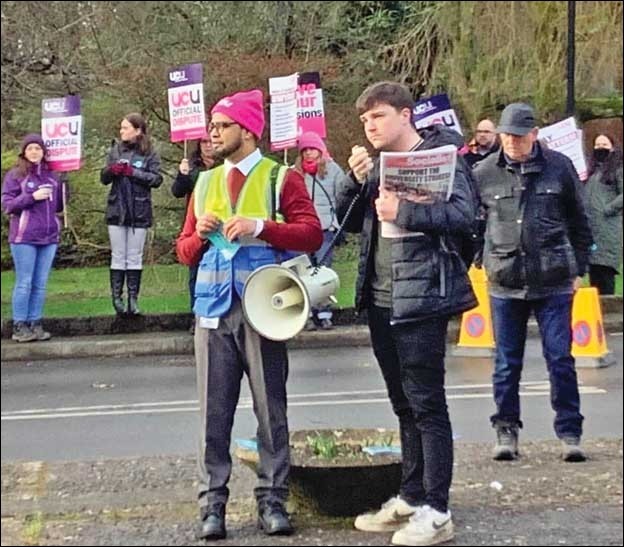 Excerpt from The Socialist newspaper, February 16, 2022

Workers at 44 universities in the University and College Union (UCU) walked out on February 14 after bosses refused to reverse cuts to the Universities Superannuation Scheme (USS). Proposals from university management organization UUK, which will see a 35% reduction in members’ guaranteed retirement income, are due to be made official on February 22.

On February 22, a strike over wages and working conditions will also begin, with 24 other universities joining the action, bringing the total to 68 universities.

This dispute concerns a 20% pay cut in real terms over the past 12 years, unmanageable workloads, unequal pay and the use of abusive and precarious contracts. In total, more than 50,000 employees are on strike. Unison members in ten unis are also taking action on wages and pensions.

Members of the Socialist Party joined the picket lines, including:

UCU members were back on the picket lines at the University of Leeds in their long-running dispute over attacks on their pension scheme.

Despite the bad weather, several first-time picketers took part in this first day of a ten-day strike.

Several of the strikers saw the dispute as not just about their pensions, saying that if university bosses got away with attacking them, other employers might see it as a green light to attack their workers’ pensions as well.

The latest round of teachers’ strikes to defend pensions has begun and socialist students were in Birmingham to show their solidarity.

Scandalously, the university is now threatening to cut 50% of the salaries of professors who do not reschedule courses canceled due to the strike.

Victory to teachers in their campaign for a decent salary, pensions and learning conditions!

The Socialist Party supported the UCU pension strike at the University of Sheffield, on five picket lines. UCU strikers held a joint rally with the Just Eat courier strike.

The full strike dates, with the number of institutions involved, are:

“Let’s stand together and fight”

Neither Washington, nor London, nor Moscow

Australian nurses on strike over understaffing and low pay

From our history: 1972 miners’ strike

NEU strike at chain of girls’ schools over pensions

Why am I going to the Socialist Student Conference

Campaigning for the March 2 student walkout to happen

Stop the eviction of the Camden homeless collective

Fund us to fight for socialism

TV: “Death of two black men: the police in the spotlight”

TV: “A Murder in Tiger Bay”