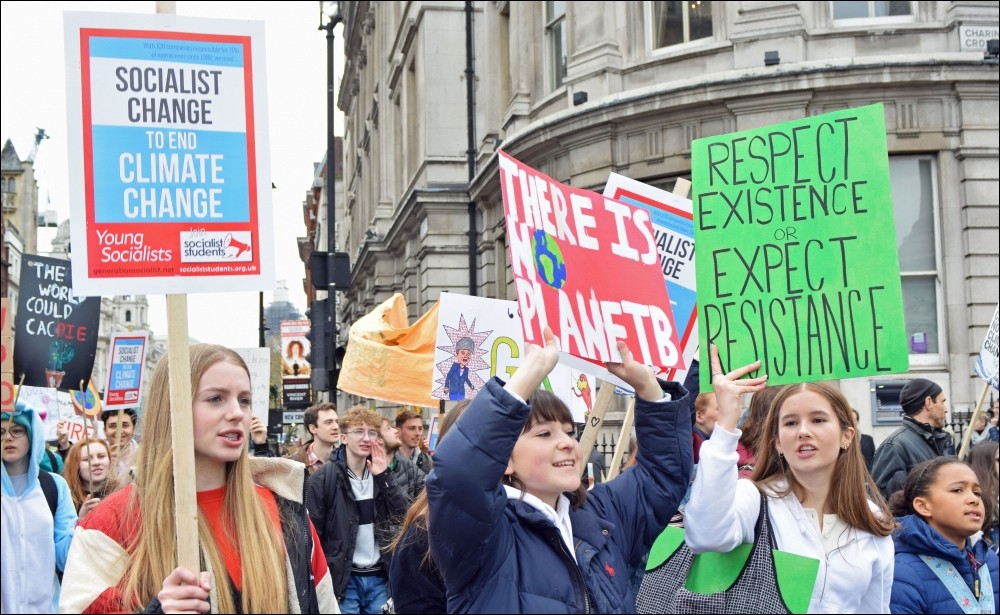 Excerpt from The Socialist newspaper, September 8, 2021

Dave Nellist – chairman of the Trade Unionist and Socialist Coalition and member of the Socialist Party national committee – wrote the following letter to the Observer in response to Green Party Baroness Natalie Bennett’s call for capitalist reforms to put a end to catastrophic climate change.

Demonstration against climate change in London on 12.4.19, photo Mary Finch (Click to enlarge)

Natalie Bennett calls for “system change, not climate change” (Your Letters, August 22), but then offers solutions that do little to challenge the vested interests of the existing economic system and its owners.

The fundamental system change needed is public ownership and rational economic planning in a democratic socialist system. Unfortunately, we do not yet have a major political party that advocates this.

Leaving society under the continued control of millionaire politicians being told by billionaire business owners not to threaten their profits will fundamentally change nothing.

Save the planet – make capitalism disappear

The other day, listening to the radio, I heard a grandmother’s story explaining why she was taking part in the recent Extinction Rebellion protest in London.

The interviewer asked her what she thought was the solution to climate change. This question would have been a gift for a socialist.

We would have explained that there is no solution under capitalism, even if the capitalists really want to find a solution.

Capitalism operates on the pursuit of short-term profits, with owners and nations competing with each other.

Until the working class and the world’s poor democratically own and control the world’s resources, we will not have a satisfactory solution.

Instead, the XR spokesperson said they weren’t “fixing” they were just alerting people to the problem.

I think most of us know that climate change is happening and there is an urgent need for humanity to address the threat.

I call on people concerned about the threat of climate change to fight for socialism, as the only way to fight the threat, democratically, on a global scale.

The Socialist Party says socialist change to stop climate change: Take control of big business so we can democratically plan the use of the world’s resources, for need and not for profit.

NHS and social care – make the rich pay, not the workers

Workers should not pay for health and social care schemes

A pivotal moment for the labor movement

9/11 and the “war on terror” twenty years later

Organizing to defend our future: October 9 – Day of action for the struggle of young people for employment

Libya – ten years after the overthrow of Gaddafi

Drive the Fascists out of Portland: Create a Mass Movement to Fight the Right

The street where I live

Fighting Calls From Within: 6 Amazon-Led Campaigns & Networks You Should Know About