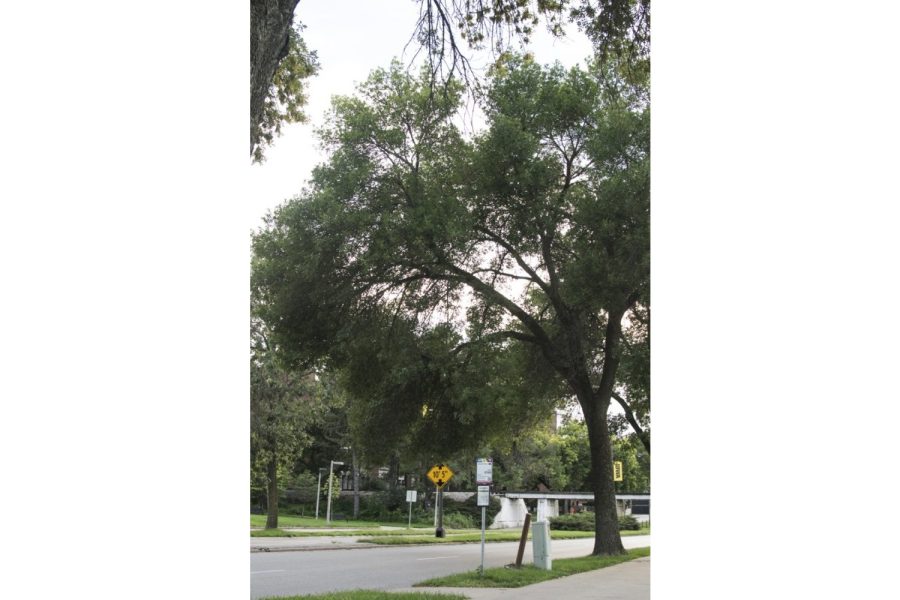 As you walk around campus, you might stare at a tree without thinking about it. You don’t know much; you might see saplings previously owned by world famous authors and poets.

While these famous trees inspire pride and give character to our campus, remembering the history of our local vegetation is imperative to learning from previous growing pains.

It’s time to recognize the problems that can arise from the lack of diverse tree species on campus.

As the harshness of winter slowly dissipates and the first green buds of spring bloom, students will undoubtedly resume enjoying the green spaces that the tree canopies once again provide.

From picnicking in the shade at Pentacrest, sheltering us from the rain between classes, and tying up hammocks or slacklines, campus trees are ingrained in our college experience.

However, the urban forests we interact with on a daily basis are not just background figures in the hustle and bustle of student life, but rather silent keepers of local history and compelling stories.

Yet the survival of such stories driven by Green ash trees on campus are threatened by invasive species, emerald ash borer.

Invasive species are non-native plants, animals or pathogens that cause damage to any ecosystem into which they are introduced.

The emerald ash borer, a species of highly destructive beetle that migrated from northeast Asia in wooden packing materials, lays its eggs in the bark of an ash tree. Once embedded, the larvae slowly kill the tree by digging tunnels and sucking its life source until it is exhausted.

These pests have wreaked havoc on the Iowa City community for the past decade, leaving over 700 dead ash trees in their wake.

The removal of trees on campus deprives native species of habitats, students of recreation, aesthetic appeals, and removes the ecosystem benefits provided by trees.

However, it is not the first tree species in Iowa City to suffer such devastation.

Believe it or not, the green ash was planted as a replacement for a previous species, the Dutch elm.

When the Dutch elm disease swept through Iowa City throughout the 1960s and 70s, it took all but two trees with it.

University of Iowa Campus Arborist and Urban Forestry Supervisor Andrew Dahl called the loss of tree species from the landscape an “ecological disaster” when he referred to past mistakes of relying on a single species for tree cover. .

By replanting mainly green ash after Dutch elm disease, the vicious cycle of relying on a single species continued and failed again in the future.

the monoculture of species and the proximity of these trees essentially invited another wave of disease.

“When you have trees all of the same species, planted like a row of corn, and you lose one, it reminds me of a missing tooth in a smile,” Dahl said. “Even if you replace him, it will never be the same again.”

Throughout his career, Dahl has prioritized the planting of various species of trees on campus.

“The idea is that the more diverse species you have, the more you don’t have all your eggs in one basket,” Dahl said. “So when a certain disease or insects come along, you don’t lose them all again.”

In addition to the 330 species he cares for on campus, Dahl is passionate about finding trees with historical significance and a good story.

“We planted a literary clove in the Dey HouseDahl said, reflecting on the celebrity tree planting.

From the iconic authors’ trees listed above to a real Johnny Appleseed apple tree, Dahl and his team have worked tirelessly to ensure not only a diverse canopy, but also star-spangled saplings.

“You might take a bite of that apple and think, ‘that tastes terrible,’ and then you think, ‘wow, that actually came from that tree. That’s the story,'” Dahl said.

Learning from the mistakes of the past, Dahl hopes to one day see a diverse and vibrant urban forest with intriguing stories that people want to come see and enjoy for themselves.

“Trees are one of the few things that will transcend generations of people,” Dahl said. “I hope some of the trees I plant now will be enjoyed by hundreds of thousands of people in the future.”

However, Dahl hopes that one day students will return in 20 to 30 years to come and sit under their favorite healthy tree again.

The columns reflect the opinions of the authors and are not necessarily those of the editorial board, The Daily Iowan, or other organizations with which the author may be involved.