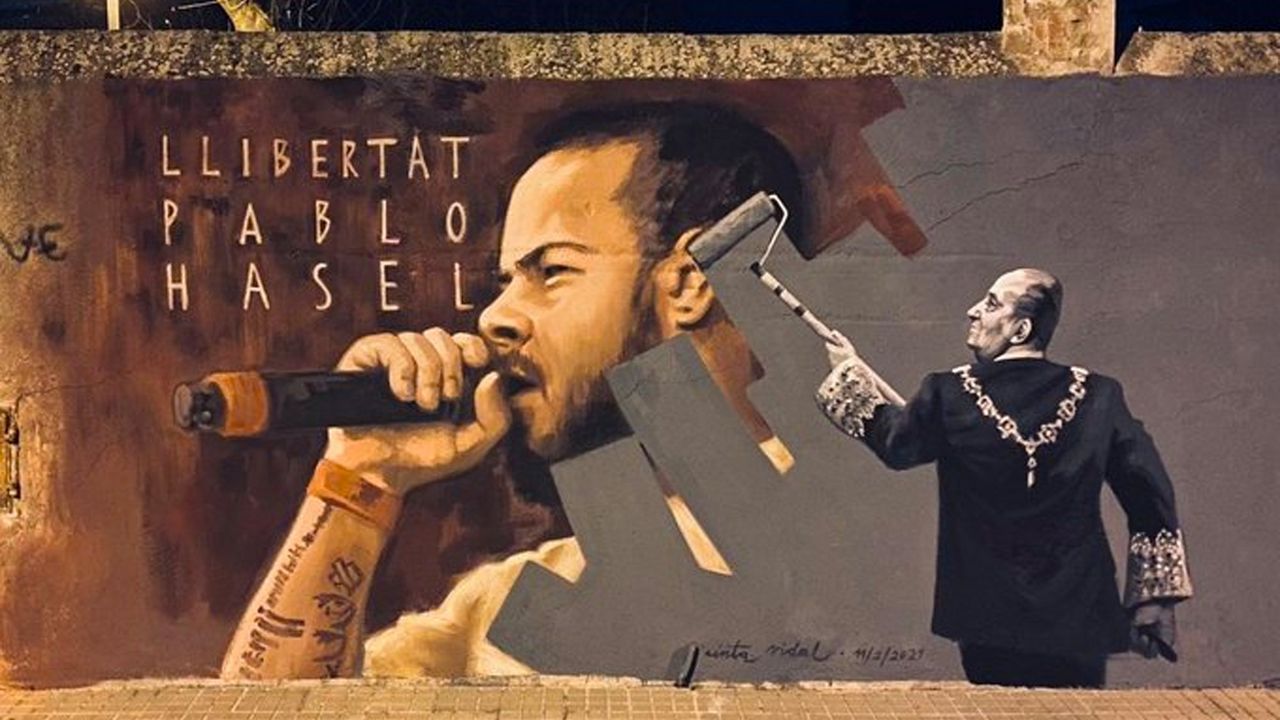 The government of the Socialist Party (PSOE) -Podemos is stepping up the persecution of rapper Pablo HasÃ©l and the crackdown on demonstrations in his defense. This is part of a wider campaign by the European ruling class on freedom of expression and democratic rights, intensified with the outbreak of the COVID-19 pandemic.

On Tuesday morning, the Catalan regional police seized Hasel at the university of Lleida, where he had barricaded himself with his supporters, and imprisoned him. He was sentenced to nine months in prison for insulting the Spanish state and the Bourbon monarchy, thus becoming the first musician imprisoned in Spain since 1978 and the fall of the fascist regime led by Francisco Franco.

Three days later, the Lleida High Court provocatively upheld another conviction, adding two and a half more years to HasÃ©l’s sentence, for allegedly obstructing justice and threatening a witness. Hasel had denounced on social media a person for having falsely testified in favor of the police who had beaten up a 16-year-old protester during the Catalan referendum of 2017. The witness then confronted Hasel, and a fight broke out.

Hasel’s incarceration sparked mass protests in his defense, days after 300 actors, musicians and artists signed a manifesto demanding his freedom, “and to oppose these types of crimes which not only restrict the right to freedom of expression, but also ideological and artistic freedom. “

For four consecutive evenings, thousands of protesters demonstrated in major cities across Spain demanding the immediate release of Hasel, including Barcelona, â€‹â€‹Madrid, Bilbao, Valencia, Tarragona and Lleida, among others. Violent clashes erupted in many towns after police indicted protesters without reason. Hundreds of protesters were injured or arrested. During a deadlock in Barcelona, â€‹â€‹a 19-year-old lost an eye after police shot her in the face with a foam bullet.

Many of these protesters are young, under 25. It is a generation that has known nothing but austerity, mass unemployment, relentless media propaganda in favor of the fascist Vox party and attacks on democratic rights, both under the Right People’s Party and under the PSOE. and Podemos. They view the police with contempt, having witnessed how they routinely use violence against protesters, workers and migrants, while treating far-right protests in wealthy neighborhoods with gloves. They recall how 10,000 militarized police officers attacked thousands of peaceful voters during the Catalan referendum of 2017.

The main political experience of this generation has been with what the ruling class passes off as the â€œleftâ€, ie the â€œleft populistâ€ Podemos party, and the betrayal, cynicism and hypocrisy of the unions, which act as parastatal organizations to enforce the reopening of the ruling class of the economy and schools amid the pandemic.

It was playing once again this week. Podemos parliamentary spokesperson Pablo Echenique tweeted: â€œAll my support for the anti-fascist youth who demand justice and freedom of expression in the streets.

As for its â€œanti-fascistâ€ claims, the PSOE-Podemos government increasingly adopts the extreme right-wing program in its relentless persecution of migrants, while minimizing the threats of a coup by sections of the army and Vox who call for the murder of “26 million” leftists. In fact, the PSOE and Podemos succeeded in passing a law to pay banks and companies 140 billion euros in bailout funds thanks to Vox’s votes in parliament .

Podemos has now submitted a proposal for a “pardon” for HasÃ©l to parliament, aware that if the PSOE opposes it, nothing will come of it. Over the past two years, he has consistently argued that his seats in parliament are never enough to bring about meaningful change. Podemos could easily bring the government to its knees by threatening to quit the ruling coalition and overthrow the government, but he refuses to do so because, as his record in government makes clear, he supports austerity policies, repression police and “the state” collective immunity “against workers.

The CUP speaks as if its votes weren’t essential to supporting two pro-austerity regional governments and with it their regional police whose riot units are known to be brutal – and indeed were the ones who were sent to stop Hasel. The CUP is currently negotiating its support for a third Catalan regional government.

The ruling class is increasingly terrified of growing social opposition. The pro-PSOE daily El PaÃ­s objected that the protests “had not been communicated to the authorities beforehand”, as required by law, but rather responded to generic calls made on social media “for the freedom of the rapper” and freedom expression â€.

El PaÃ­s complained that the protests were not organized and controlled by established political parties. Significantly, the newspaper, which was known for its support for the fascist anti-Catalan campaign, feared that the Catalan separatists would not organize these protests in Catalonia, unlike the separatist protests of 2017-2019.

The protests, he writes, â€œare different from those of recent years. No flags or esteladas [the Catalan independence flag], no banners and lots of dark clothes. â€œWe are here for freedom of expression and HasÃ©l,â€ they repeat when asked to participants. There is no more talk or organization. And in Madrid, they also chant: ‘Here are the anti-fascists.’ “

Terrified of the idea that the fight for the defense of democratic rights intersects with the fight against policies of “collective immunity” and bank bailouts, the bourgeois press and the political establishment label the demonstrators as thugs, violent Catalan secessionists and terrorists. HasÃ©l’s private life is turned upside down for any “crime”. His tweets and songs, especially the more confusing or unpleasant ones reflecting Hasel’s Stalinist policies, are repeated in odious ways.

However, Hasel was imprisoned in a desperate attempt to silence a figure who expressed widely felt anger at the political criminality of Spanish capitalism and the cowardice and betrayal of pseudo-left groups like Podemos, which Hasel denounced to many. times.

The policy of the ruling establishment’s attacks on Hasel was exposed this week in her treatment of neo-Nazi leader Isabel Medina Peralta. As Hasel barricaded himself at the University of Lleida on Sunday, Peralta marched with 300 neo-Nazis through the streets of Madrid to pay tribute to the Blue Division, the 45,000-strong Spanish fascist unit that fought alongside the Nazi Germany vs. the Soviet Union in World War II.

Shamelessly appealing to anti-Semitism and the traditions of Spanish fascism, Peralta said: â€œIt is our supreme obligation to fight for Spainâ€¦ The enemy will always be the same, although with different masks: the Jewishâ€¦. The Jew is the culprit, and the Blue Division fought him.

She was immediately given a platform, interviewed by three major newspapers. El Mundo titled his interview “Isabel Peralta, the new face of Spanish fascism”. 20 minutes had her track, “Who is Isabel Peralta, the young phalangist who considers the Jews ‘an enemy’.” While El Spanish conducted his play with â€œThe Young Anti-Semite Paying Homage to the Blue Division: ‘I am a Fascist and a Socialist’.

The attempt of the Spanish bourgeoisie to give a false â€œsocialistâ€ color to its fascist policies, by hiding the historical opposition between fascism and the socialist workers movement, is totally reactionary. The task of any socialist is to defend democratic rights against the fascist assault of the Spanish bourgeoisie and to call for the immediate release of Hasel.

This journal examines the response of pseudo-left political trends at the international level to major global political events of the past decade.

Biomass – Campaigns challenging the use of woody biomass for energy lack key facts, according to IEA Bioenergy