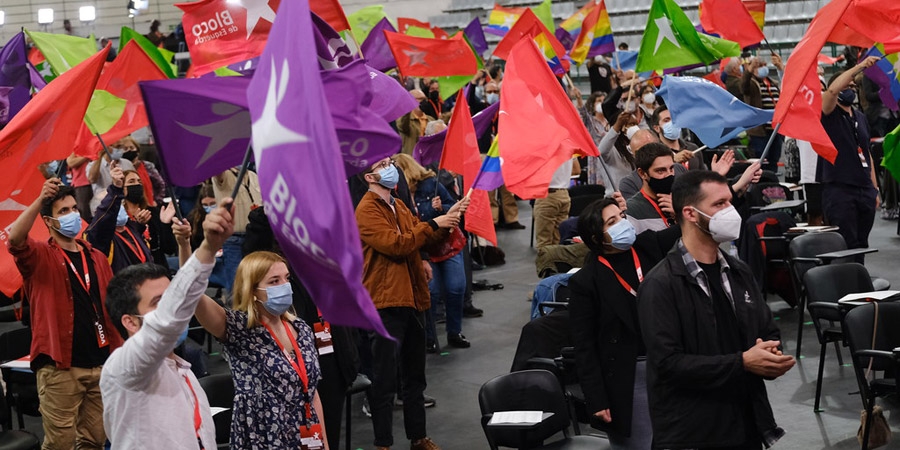 It was inevitable that the 12th National Convention of Portugal’s Radical Left Bloc (BE), the third largest parliamentary force, would be different from its predecessors – the COVID-19 pandemic guaranteed that.

A low delegate-to-member ratio – criticized by some – cut the normal size of the convention in half, and international guests from BE sympathetic parties, such as the Australian Socialist Alliance, were absent.

One thing that hasn’t changed is the piecemeal coverage by Portuguese mainstream media, still rubbing their hands in anticipation of any rows the bloquistas might have.

In addition to the pandemic and its social toll, two major events have shaped the convention: the storm created by the vote of the BE in December against the 2021 budget of the ruling Socialist Party (PS) and the rise of the far right Chega! (Enough!) – a split from the mainstream right-wing Social Democratic Party (PSD).

The BE voted against the budget because it left the dilapidated National Health Service (SNS) underfunded, while bailing out bankrupt private bank Novo Banco. He was criticized for this by the Portuguese Communist Party (PCP), his left-voting rival of the PS. (The PCP’s abstention had allowed the budget of the minority PS government to pass once the BE and right-wing parties opposed it.)

As for the racist Chega, its emergence put an end to complacency about a supposed Portuguese exemption from racist and xenophobic politics. Chega indulges in nostalgia for the country’s dictatorship from 1932 to 1974 and pushes all of Portugal’s current problems out of the political system born out of the Carnation Revolution of April 25, 1974.

A recent poll shows that Chega is in competition with the BE for third place, behind the PS and the PSD, and that he is almost certain to enter parliament in the next elections.

In January’s presidential election, held amid the pandemic, Chega leader André Ventura won 11.9% of the vote, while BE candidate Marisa Matias failed to win. achieved only 4% after reaching 10.1% in 2016.

Delegates to the convention, whose theme was “In response to the crisis, justice”, had to decide between five motions on the path that the BE should take in the next two years.

BE’s decision-making process differs from that of most of its European counterparts. Their conventions are usually structured around a single draft resolution from the outgoing leadership to which convention delegates propose amendments.

The BE approach allows for a more meaningful debate on the state of the political battlefield, strategy and tactics, BE goals for the next two years and how to achieve them.

Three of the five resolutions submitted to this convention received little support. For Motion C — “More democracy, more organization” — a central problem for the BE was the persistence of the political currents that had founded the BE in 1999: the Anti-Capitalist Network, a descendant of the Trotskyist Revolutionary Socialist Party (PSR) and the People’s Democratic Union Association Party (UDP), of Maoist origin.

Motion C elected 8 delegates (2.3% of the total) to the convention, gained the support of 17 after hearing the debate, and elected four supporters to the 80-member National Council.

Motion N – “For a peaceful revolution” – criticized the BE leadership for not breaking with the PS government in 2017, when it was clear that Prime Minister António Costa was breaching the 2015 agreement allowing him to govern.

The success of the leader Chega Ventura in the presidential election was a wake-up call: “Underestimating the rise of the extreme right shows that the BE, together with the PCP, has not understood that there is a widespread lack of confidence in their proposals and abilities. “Motion presenter Paola Rosa called on BE to focus on anti-racism work.

Motion N had five delegates (1.4%), won the support of seven and elected four supporters to the National Council.

Motion Q – “Break the chains, fight for socialism” – denounced what its presenter João Patrocínio called “the absolute concentration on parliamentary work”. The BE was less and less a party-movement and more and more “a party like the others”.

The only solution was to “undo ultra-centralization and institutionalization” by limiting the terms of office holders, holding internal referendums on key decisions, allowing a permanent internal discussion board and imposing mandatory worker rotation. party full time.

Two of Motion Q’s nine delegates (1.5%) left him in the final vote of the convention and he did not win any positions on the National Council. The support of Motions C and N enabled him to gain a place within the control commission of 7 members of the BE.

The main contest of the convention was between motions A and E. Motion E – “Facing impoverishment, polarizing to the left” – was the work of the Convergence platform, the product of a meeting in December 2019 of BE activists of different sensitivities and aiming to “contribute to rethinking the BE, its presence and its intervention in society”.

Motion E shared Motion N’s criticism of the BE leadership’s “drift” after 2017, supposedly due to a commitment to governmental stability that only the PS could and has benefited from. The BE, as a project of radical alternative to the PS, was “compromised”.

The BE presidential campaign, despite Matias’ effort and commitment and the strength of his platform, “did not distinguish itself clearly and in depth from other candidacies, becoming entangled in a process that continued to insist on agreements with the PS”.

Motion E also shared the view of other minorities that the internal life of BE was stifled by the prevailing alliance between its founding tendencies.

“We propose an alternative model that changes the forms of ownership, the relations of production and the productive forces, respecting the dignity of people and based on a better life and not on consumption. [and] a just energy and agro-ecological transition, with a radical decarbonization of the economy.

His other main points of attention were the need for an emergency plan to deal with the social and economic impact of the COVID-19 crisis, the restructuring of the Portuguese debt load, an extensive housing plan social and the restructuring of all these projects along regional lines. as a means of making work and life inside the country increasingly empty.

Motion E got 66 delegates (19.2%) elected to the convention, won the support of 64 after the debate was heard, and elected 17 supporters to the National Council and one to the Oversight Commission.

The main speakers of Motion A (“Getting out of the crisis, fighting inequalities”) were the best-known leaders of the BE, who mostly avoided polemics with the other four tendencies, concentrating essentially on the tasks of the BE in relation to the government of Antonio Costa and the rise of the extreme right.

However, Pedro Filipe Soares, Presenter of Motion A and Chairman of BE’s Parliamentary Caucus, addressed the question of whether BE’s break with the PS was permanent, as apparently welcomed by Motion E.

He said: “Has the BE ever let down the left? No, it’s the left that never let the left down [and that’s why] a left-wing budget will have the BE vote.

That the PS was likely to present such a budget for 2022 was unlikely given its “submission to European interests” while “leaving workers behind”.

Summarizing Motion A, MP Jorge Costa said the convention had seen “a real debate in which we faced our difficulties”. If, during the pandemic, “we have never had so much dialogue with the sectors in struggle, much more is needed to convert this influence into a force of social resistance”.

Referring to the criticism of Motion C, Costa added, “We are not building a sanctuary for the heroes and heroines of the struggle for socialism, but a political force to defend the people against the predators of vulture capitalism.”

This work must begin with the repeal of Portuguese labor laws, so that economic recovery does not rely on the super-exploitation of workers.

Motion A had 233 (67.9%) delegates elected to the convention, won the support of 210 in the final vote, won 54 members of the National Council and five of the seven members of the Control Commission. This result equates to a loss of about 20% support from the previous convention.

Closing the convention, re-elected National Coordinator Catarina Martins committed the BE to resolutely fight against the far right and support the range of struggles poised to erupt when the pandemic subsides.

[Dick Nichols is Green Left’s European correspondent, based in Barcelona.]