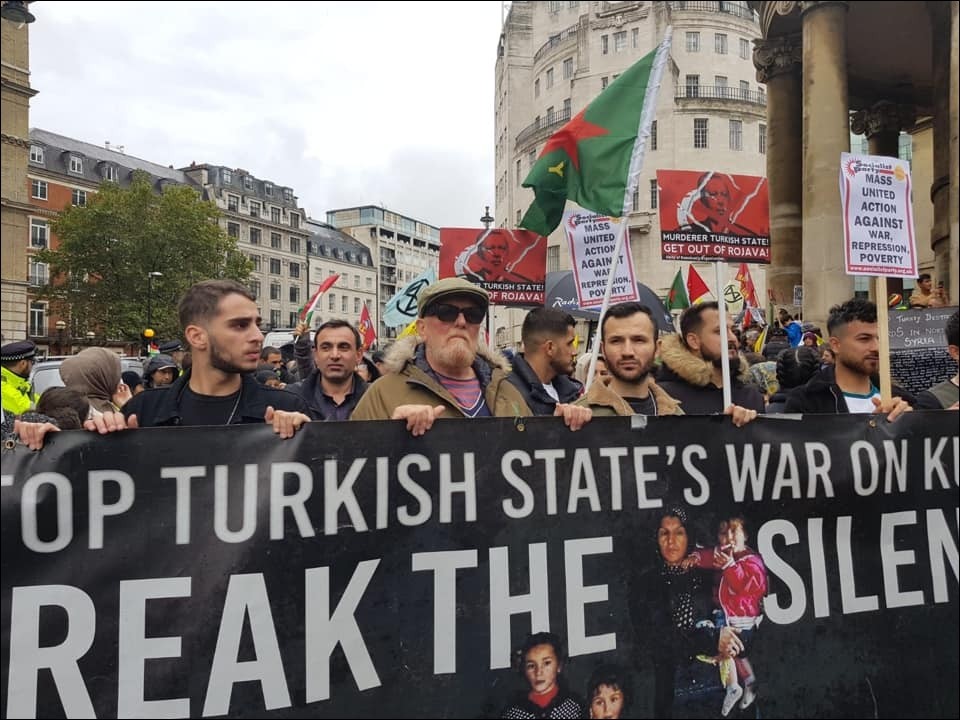 Across the country, members of the Socialist Party joined in solidarity demonstrations opposing the Turkish state’s invasion of northern Syria and in favor of Kurdish self-determination, photo Socialist Party of London (Click to enlarge)

US President Donald Trump’s decision to withdraw 1,000 US troops from northern Syria has given the Turkish military the green light to launch a brutal invasion of Kurdish-held areas. Now it escalates into a larger conflict, involving the Syrian regime, Russia and Iran.

The indiscriminate bombardment by the Turkish army of towns along the Turkish-Syrian border has already led to the massacre of many civilians, including children. More than 200,000 people have been forced to flee their homes and water supplies to nearly half a million people are cut off.

Turkey’s Syrian militia allies, involving reactionary Islamist fighters, are accused of carrying out summary executions. There are widespread fears that the conflict will allow Isis fighters to regroup in the region.

The Syrian Democratic Forces (SDF), dominated by the Kurdish People’s Protection Units (YPG), said they had negotiated a deal with Damascus that will see the Syrian army occupy Kurdish-controlled territory and deploy along the border. Syrian-Turkish.

But at what cost for the Kurds? The advance of the Syrian army will see President Bashar al-Assad approaching his stated goal of reclaiming “every square inch” of Syria, after nearly nine years of bloody civil war.

The Syrian regime has always opposed the small semi-autonomous state, in Rojava, which emerged during the civil war, considering it an attempt to “partition” the country.

SDF chief Mazloum Abdi said the deal with the Syrian regime and its Russian ally could “save the lives of millions of people who live under our protection.” However, he conceded that this would lead to “painful compromises”.

Having occupied the Kurdish regions, Assad will not allow the Kurds to consolidate real autonomy and a de facto separate state any more than Turkish President Recep Tayyip Erdogan. Neither will allow the Kurds to fully realize their democratic and national aspirations.

Now it’s a race between the Turkish and Syrian armies to see who can seize as much territory as possible. While Turkey or Syria, backed by its “military sponsor” Russia, and its regional ally Iran are unlikely to want to confront each other directly, the situation is volatile and a wider war cannot be achieved. excluded.

The Kurds have a long history of betrayal by regional and world powers. Today, they probably have the prospect of seeing the region split between competing regional powers and their backers.

Today’s allies and defenders of the Kurds will prove themselves to be their enemies and oppressors tomorrow.

The United States used the SDF as proxies to lead the fight against Isis in northern Syria. Once Isis was largely defeated in Syria, it was only a matter of time before Trump abandoned them.

Calls for the “international community” to deploy an international force to impose a “no-fly zone to prevent disaster” have simply been ignored by the major powers.

How can we count on the governments of the rich, which conduct austerity policies against their own working class, to act in the interests of the Kurds and other oppressed minorities? The United States, France, Britain – which sells arms to its NATO ally Turkey – and other military powers, have for many years cynically exploited the plight of the Kurds, for their own sake. Selfish geostrategic goals in the Middle East.

The Kurds and other oppressed peoples of the Middle East, and the entire working class, can only rely on their own strength, self-organization and class solidarity.