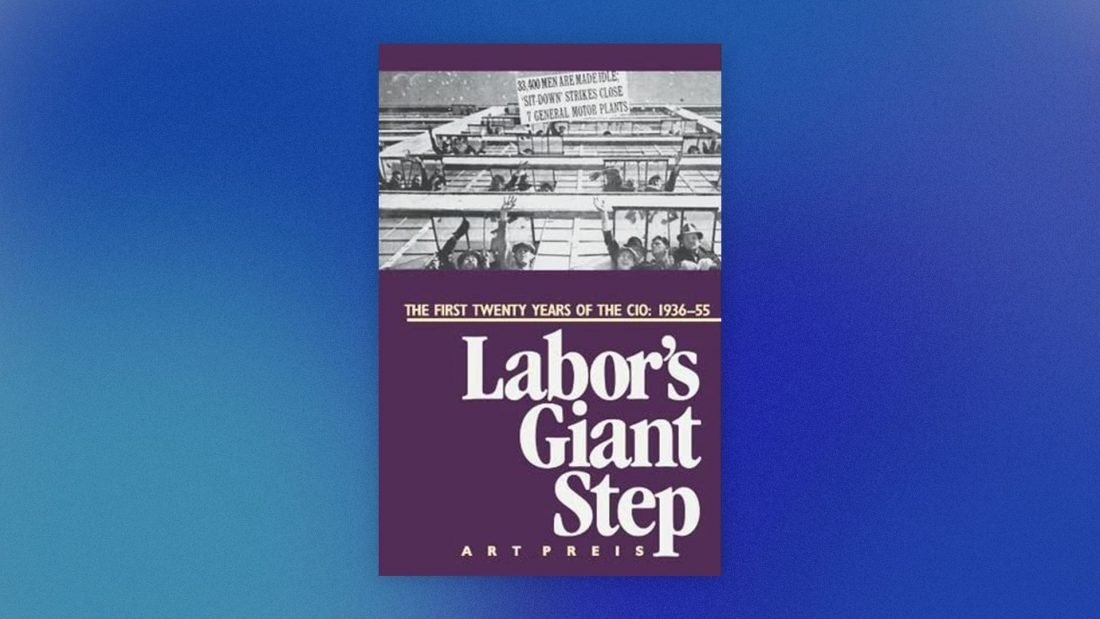 The Giant Leap of Work: Twenty Years of CIO must be at the top of every union activist’s reading list. It details the “independent life” of the militant labor federation, the Congress of Industrial Organizations (CIO), from its founding in 1935 until its taming and merger with the American Federation of Labor (AFL) in 1955. This story tells moving stories of the boldness, fearlessness, and creativity of rank-and-file workers at a time when radical socialists and communists were a leading force and labor organizing was at its height in the United States

Art Preis, himself a labor activist and Trotskyist (supporter of Russian revolutionary Leon Trotsky), recounts the beginning of the story in the midst of the Great Depression, when millions of workers and their families were starving and homeless. Most laborers were expelled from the skilled craftsmen’s unions of the conservative AFL. In order to win unionization and better lives, they fought to build the CIO’s new mass industrial unions, such as the United Auto Workers, in which all employees in an industry were united into a powerful union. .

Rise of industrial unionism. Educated, agitated, and organized by radicals, workers staged mass general strikes in Minneapolis, San Francisco, and Toledo, Ohio. With new tactics like getting the unemployed to picket, massively helping women from their “ladies helpers,” and seeking widespread community involvement, they scored victories that rocked the ruling class in its heart – and led to the formation of the IOC.

Workers joined the new organization in droves. They hit Flint, Michigan, Oakland, California and Detroit. They’ve been down south, the coal mines of Virginia and Kentucky, and so many other places. They defied court injunctions against mass picketing. Often they fought pitched battles with the police, National Guard, and corporate security thugs shooting to kill. They invented sit-down strikes, where workers occupied factories to prevent strikebreakers; “flying squads” of roving mass pickets; and secondary boycotts against companies doing business with those hit.

Preis doesn’t pull punches. Those who deserve contempt get it. It dismantles the liberal myth that Presidents Franklin Roosevelt and Truman were “friends of labor,” documenting how the two freely broke strikes to protect the bosses’ excessive profits and to build the anti-Communist witch hunt. It shows how senior labor officials undermined their members’ economic justice efforts to appease the politicians and employers they defended, details that help us recognize these problems today.

Murderous attacks: Taft-Hartley and McCarthyism. Radical leadership and the courage of frontline workers gave the movement traction well into the post-World War II McCarthy era. But throughout the war years (1941-1945 for the United States), big business strategized, passed anti-labour legislation, and harassed workers and their militant leaders. Members of the Stalinist Communist Party were prominent in the labor movement. But even though they supported all of Roosevelt’s and then Truman’s attacks on workers during and after the war, they were singled out with the Trotskyist radicals as persona non grata.

The infamous Taft-Hartley Act of 1947, passed by Republicans with strong support from Democrats, banned all the most effective tactics: sit-down strikes, secondary boycotts, mass picketing, wildcat strikes, sympathy or political strikes and closing of stores. He gave the green light to so-called “right to work laws” that ban unionized stores except when employers allow it. These have swept across the South and are now in effect in more than half of the states. The law also required union officials to sign anti-communist pledges. Most unions expelled the radicals.

Today, after 70 years of declining union membership, stagnant wages and lost benefits, workers are fed up and fighting back. Democratic politicians continue to sell out progressive labor laws, giving fresh impetus to radical organizing. The time has come for the next giant leap of labor.