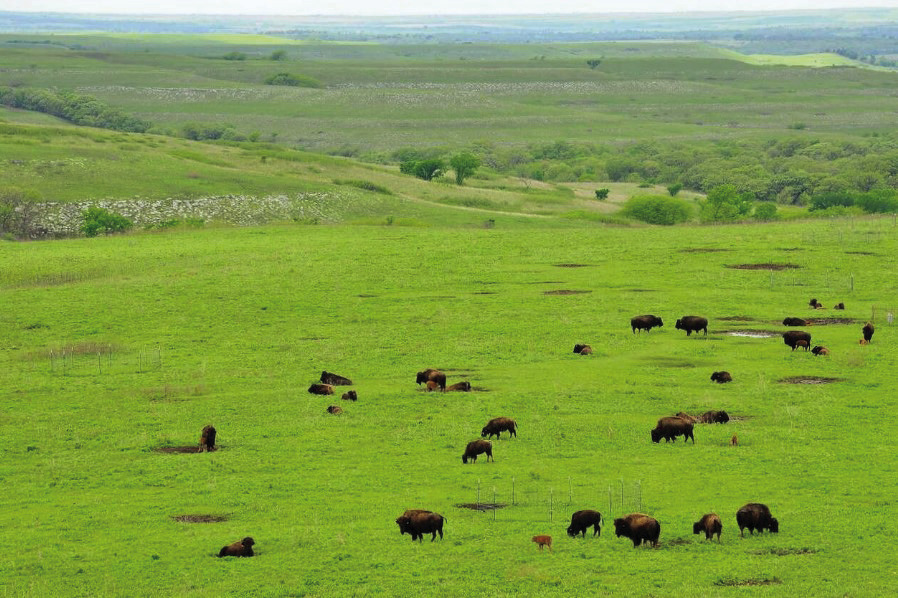 — A Kansas State University study found that reintroducing bison—a once-dominant grazer—doubled plant diversity in a tallgrass prairie. The research involves more than 30 years of data collected at the Konza Prairie Biological Station and was recently published in the prestigious journal Proceedings of the National Academy of Science, or PNAS.

The study found that plant communities were also resilient to the most extreme drought in four decades. These gains are now among the largest recorded increases in species richness due to grassland grazing globally, researchers said.

“Bison were an integral part of the North American grasslands before they were abruptly removed from more than 99% of the Great Plains,” said Zak Ratajczak, assistant professor of biology and principal investigator. “This removal of bison occurred before quantitative records and therefore the effects of their removal are largely unknown.”

The study took place in the Flint Hills ecoregion, which is the largest remaining tallgrass prairie landscape. Researchers examined plant community composition and diversity in three treatments designed to capture characteristic management regimes: no mega-grazers were present; bison were reintroduced and allowed to graze year-round; or domestic cattle were introduced and allowed to graze during the growing season.

“Our results suggest that many grasslands in the central Great Plains have significantly lower plant biodiversity than they would have had before the bison were largely wiped out,” Ratajczak said. “Returning or ‘re-wild’ native megafauna could help restore grassland biodiversity.”

The study also found that cattle had a positive impact on plant diversity, compared to not having large grazers present, although the increases in plant species richness were significantly smaller than those caused by bison.

“I think this study also shows that livestock can have a largely positive impact on biodiversity conservation in our region, especially since many livestock ranchers drive the prescribed fires that have prevented these grasslands from becoming forests. “, Ratajczak said. “What this study really suggests is that where economically and ecologically feasible, the reintroduction of bison could have an even more positive effect on biodiversity conservation.”

In addition to addressing land use, the researchers also investigated how bison affect the resilience of plant communities to climate extremes. Due to the long duration of the study, researchers were able to capture one of the most extreme drought events to occur on the Great Plains since the Dust Bowl of the 1930s.

Researchers found that after the extreme climate, native plant species in the bison grazing area were drought resistant.

“The resilience we found in bison grasslands is also consistent with the idea that diversity promotes ecological resilience,” Ratajczak said. “And that resilience will only become more important if our climate becomes more extreme.”

“Some of the most significant ecological trends take decades to develop, and we can only identify them using long-term records like those supported by the NSF LTER program,” Nippert said. “Without this kind of data, fundamental properties of ecosystems can go unnoticed using only short-term experiments.” A series of six grants totaling more than $31.6 million since 1980 from the National Science Foundation funded the study and was conducted under the NSF Long-Term Ecological Research, or LTER, program.
“The research done at Konza Prairie is truly unique and impressive,” said David Rosowsky, K-State’s vice president of research. “There are very few places in the world that can provide this type of long-term data that can have such a strong impact on how we interact with our natural resources.” Konza Prairie Biological Station is jointly owned by Kansas State University and The Nature Conservancy