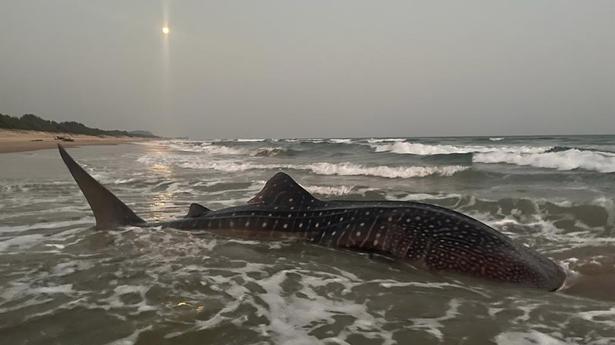 In Visakhapatnam, organizations are working to document marine diversity and plastic pollution to protect the ocean ecosystem

On World Oceans Day celebrated on June 8, conservationists call for a sustained awareness campaign to shed light on the importance of the oceans

On World Oceans Day celebrated on June 8, conservationists call for a sustained awareness campaign to shed light on the importance of the oceans

A few months ago, a finless porpoise was stranded dead near Divis Bridge, about 40 kilometers from Visakhapatnam. This was the first record of the marine mammal stranded in the coastal belt. At the same time, a few kilometers away, a spinner dolphin runs aground in Rushikonda. In the recent past, a video was shared by fishermen of a dead baleen whale floating in the waters closer to the coast of Visakhapatnam. Over the past year, there have been several incidents involving marine species like humpback dolphins, whales, dead sea turtles stranded along the coast, setting off alarm bells among conservationists. environment.

On World Oceans Day, celebrated on June 8, conservation organizations and researchers reiterated the need for a focused study and sustained awareness campaign to shed light on the importance of the oceans, the ecosystem they support and conservation measures. “The situation has worsened year by year. Most of the studies carried out so far have been targeted at fishing, but no systematic data collection has been carried out on the conservation of marine life in the belt. coast of Visakhapatnam,” says Sri Chakra Pranav Tamarapalli, founder and project manager of the East Coast Conservation Team based in Visakhapatnam.


Pranav is currently documenting the marine biodiversity of the region in association with Green Paw. “The coast of Visakhapatnam has a good population of sharks and rays. But only five species of sharks and rays are protected by law even though nearly 30 species are threatened,” says Pranav. Overfishing has caused big problems for sharks and rays, researchers say. “Deaths from collisions with motorboats are also a likely reason. Bycatch (the accidental capture of non-target species such as dolphins, sea turtles and rays) is another major reason,” adds he. A study in Nature, a leading scientific journal, indicates that the global population of sharks and rays has fallen by more than 70% in the past five decades. Efficient modern fishing gear exacerbates the extent of bycatch as the net often covers a large area which is very unselective.


Balram Naidu and his team of divers at Rushikonda clean the ocean floor every year, removing tons of plastic. From saving marine species like the endangered olive ridley turtle entangled in ghost fishing gear to helping smaller species of fish escape floating plastic waste, Balram has lost count of these incidents. while removing plastic waste from the sea. “Microplastics are invading the ocean ecosystem and every year the situation is getting worse,” he adds. To raise public awareness, it periodically organizes coastal cleanups and underwater cleanups in Rushikonda. This year, India Youth For Society (IYFS), based in Visakhapatnam, launched its Clear Coasts (CCC) campaign in March 2022 to raise awareness about marine litter and plastic pollution. Every Sunday, the team organizes an awareness program on the harm of sewage flowing into the sea and coastal plastic pollution in Visakhapatnam. “Over the past 11 weeks, volunteers have collected over 430 kilograms of plastic waste. Proper waste disposal is an area we are currently addressing to protect our marine ecosystem,” says Appala Reddy Yendreddi of IYFS.