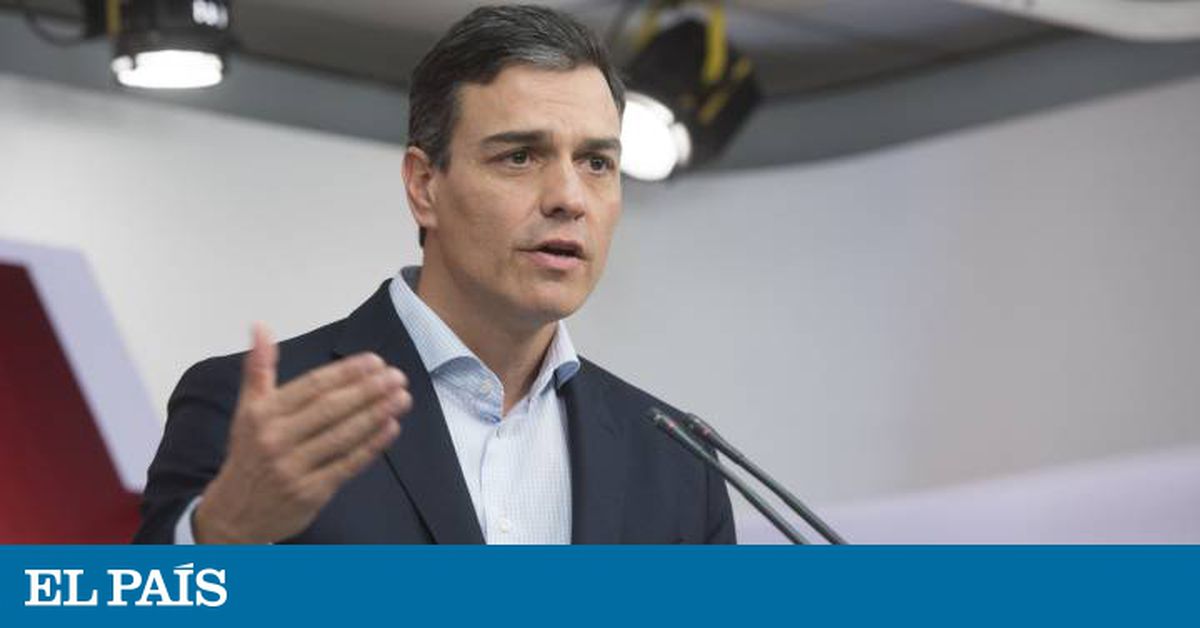 The general secretary of Spain’s main opposition Socialist Party (PSOE), Pedro SÃ¡nchez, announced on Friday that he wanted to form a transitional government that would call general elections “as soon as possible”, if the motion of censure tabled by the party Friday against the Popular Party (PP) Prime Minister Mariano Rajoy prosperous.

This decision comes a day after Spain’s High Court, the Audiencia Nacional, rendered a judgment in GÃ¼rtel’s main trial, a large-scale case of bribes against contracts affecting the ruling People’s Party (PP).

The time has come for everyone to assume their responsibilities

In the decision, the court fined the PP for benefiting from the program, which ran between 1999 and 2006, and sentenced a former treasurer to 33 years in prison. The judgment also found strong evidence for the existence of a party slush fund.

SÃ¡nchez announced on Friday his intention to be elected Prime Minister of Spain in the vote of no confidence in order to form a PSOE government which would take care of three tasks: “Return to political and institutional normality, regenerate democratic life and set in motion a social agenda that would deal with urgent social issues.

SÃ¡nchez did not announce the election call schedule and said he was open to being elected with the support of all parties represented in Congress, including those pro-Catalan independence. But he warned these parties that his government “will guarantee and ensure respect for the Spanish Constitution”, as well as the maintenance of “national sovereignty and territorial integrity”.

The vote of no confidence is justified, added SÃ¡nchez, to “recover the dignity of our democracy, which is today called into question by the party which governs in the main institutions”.

Senior socialist officials met on Friday morning to discuss the decision to use the most serious existing parliamentary tool against Rajoy. “The time has come for everyone accept responsibilitySaid a senior PSOE official.

The censure motion is supported by Unidos Podemos, the Podemos anti-austerity coalition and the United Left Federation, but their common seats in Congress are not enough to guarantee approval.

Ciudadanos is asking Rajoy to call new elections in the coming weeks (see box below), but Ciudadanos general secretary JosÃ© Manuel Villegas said on Friday the party would not support the no-confidence vote. “The solution is not SÃ¡nchez’s opportunism,” he told reporters. “It seems he wants to go to La Moncloa [prime ministerial palace] anyhow. “

No socialist leader had made a single public statement on Thursday to comment on GÃ¼rtel’s decision, but PSOE General Secretary Pedro SÃ¡nchez contacted high-ranking members of the party throughout the day, and several of them. called for an extraordinary plenary session of the party’s executive committee for today.

The PSOE considers the PP’s response to the decision to be â€œunacceptableâ€. In a statement, the ruling party downplayed its importance, noting that â€œat no time has the PP been prosecuted. This is a civil liability, which is legally called “profit-making participant”, and which necessarily involves ignorance of the facts. “

In contrast, Podemos leader Pablo Iglesias encouraged SÃ¡nchez to file a motion of no confidence against Rajoy, promising to support such a move. And Ciudadanos leader Albert Rivera, whose support is crucial to Rajoy’s minority government, said the decision would mark “a before and after” in relations between the two sides.

The PSOE was faced with a difficult decision, given that it supports the government in its management of the Catalan independence crisis, in particular on the issue of Article 155, which granted Madrid emergency powers. on regional affairs after separatists declared unilateral independence in October last year. . This constitutional provision stay in place although a new Catalan prime minister has emerged, and it is not known what the next steps will be.

On the other hand, the PSOE had recently tabled a motion of censure against the regional prime minister of Madrid Cristina Cifuentes, who finally resigned on a university scandal. Socialist officials were faced with the following dilemma: If Cifuentes’ questionable resume was reason enough for a no-confidence vote, a court ruling finding the PP guilty of taking advantage of GÃ¼rtel should do the same.