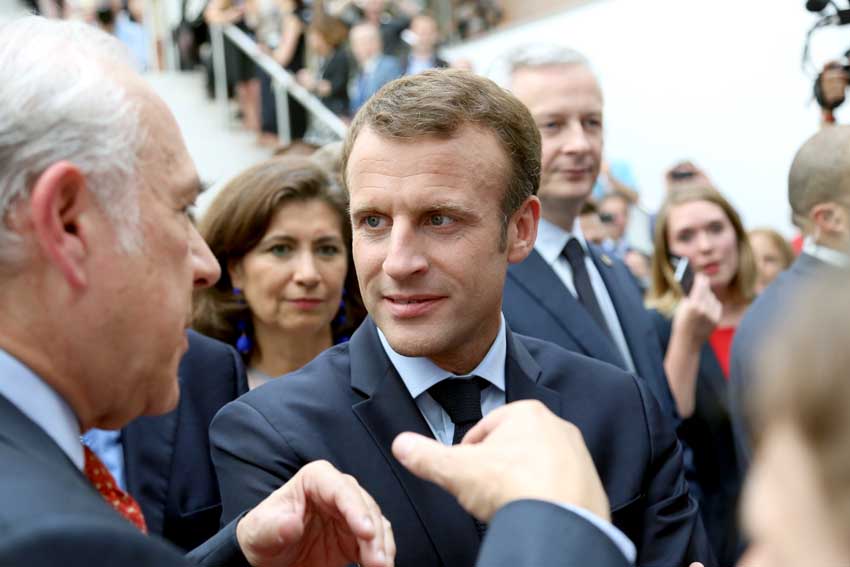 Anger at rising prices, record profits for multinationals and French shareholders, destruction of public services, reduction of the rights of the unemployed and wage strikes underway for several months… As in the rest of the world, instability is the rule in France.

The last five years in power of President Emmanuel Macron are synonymous with exacerbated social tensions: the “Yellow Vests” movement, movements for more social justice, mobilizations against the pension reform in 2019, etc.

The Covid crisis has, for a time, anesthetized the struggles. Using the pandemic and unable to protect the population, Macron preferred to impose a very repressive state of health emergency during the first confinement.

The aforementioned struggles did not result in a decisive victory against Macron and the capitalists, even though the government was forced to temporarily back down on the attack on pensions. And on the political front, no party or political force has mobilized a coordinated opposition of workers and the general population against these policies.

Only France Insoumise (FI), with its 17 deputies (MPs) in the National Assembly, and its leader, Jean-Luc Mélenchon, represented substantial opposition to Macron.

What does Macron want?

Macron officially announced his candidacy for the presidency at the end of February, just six weeks before the first round of the election, which will take place on April 10. The war in Ukraine serves as a justification for not campaigning and for saying that his re-election is inevitable.

On March 18, Macron announced his program to fight for the interests of the bosses! He wants a later retirement at 65, compulsory work for recipients of social minima, the dismantling of national education by attacking the status of teachers and then of others, a refocusing on the flagship sectors of energy supply (nuclear), etc. The same program as the traditional line!

The capitalists thus have in Macron the political representative of their class and intend to keep him for another five years. The bourgeois (capitalist) parties, initially of the classical right, such as Sarkozy’s Les Républicains or the “bourgeoisified” Socialist Party (SP) of François Hollande and Anne Hidalgo, have for the moment collapsed. Indeed, little or nothing in their program distinguishes them from Macron and his policies.

From the standpoint of the election itself, Macron is hoping for a runoff with Marine Le Pen, which would see him elected hands down. There is little chance that Le Pen’s RN (“Rassemblement National”, ex Front National) can win. His profile has not been able to evolve over the past five years.

The nationalist right and the far right dominated the start of the election with a virulent anti-immigration campaign. But rising prices and the cost of living have returned to the center of the debate. Social issues remain central.

The right and the extreme right are in crisis and are regrouping around Eric Zemmour, the racist, sexist and ultra-liberal politician. Le Pen is on the other side, with the Republicans.

How to defend yourself

The challenge is for workers and young people, who are most aware of the issues, to be able to express their own views as clearly as possible. We need a vote against Macron and the capitalists, the right and the far right, but also a vote that breaks with all the policies carried out in the name of the capitalists by the PS and the Greens in government and in the regions and departments.

On the political left, Jean-Luc Mélenchon of France Insoumise-Union Populaire is running again. In the first round of the 2017 presidential election, he won 19.6% of the vote, narrowly failing to contest the second round against Macron.

Mélenchon is the only candidate capable of playing a central role in reaching those of the working classes who want to fight Macron, but also the growing number of abstainers.

On the basis of his “Common Future” program, Mélenchon succeeded in bringing together activists from social movements, organizations and parties in a grouping called “L’Union populaire” (Gauche Révolutionnaire – Revolutionary Left – part of the Parliament of Union Populaire and has been building France Insoumise since 2017).

Registering between 13% and 15% in the polls, Mélenchon is in third position, just behind Le Pen, and Macron, who is in the lead. Mélenchon is now ahead of Zemmour, who loses points, and Valérie Pécresse of the right-wing Republicans. He leaves the Greens and PS candidates far behind.

The PCF (French Communist Party) has unfortunately chosen this time to go it alone, essentially to continue to exist, and its candidate receives around 4 to 5%.

This is not trivial, and shows the potential of a single FI-PCF candidate. The PS, on the other hand, reached a historic low of 2%-3%, at the same level as the NPA (New Anticapitalist Party) of Philippe Poutou and Olivier Besancenot, also candidates, as well as Lutte Ouvrière (workers’ struggle).

Mélenchon’s program calls for: freezing prices, developing public services, creating real jobs and increasing wages. These are the crucial pillars of the program.

The only force capable of implementing these measures is the working class through the establishment of a workers’ government. But ‘Common Future’ only goes halfway. It does not deal with how to change society and end capitalism, and why we must fight for a socialist society.

For these reasons, the Revolutionary Left campaign to support Mélenchon’s candidacy, in France Insoumise, and also with our own material, seeks to go further on certain demands by fighting for: the state monopoly of public health services, the renationalization under workers’ control; decent jobs for all; an increase in the minimum wage; pensions and wages; retirement at age 60; increased resources for public services; the renationalization of Energie de France and Engie; and railways.

We also have disagreements, such as on international issues, and the illusions that Mélenchon has about international capitalist institutions, and about a supposedly historic role for France abroad.

On the streets, in door-to-door campaigns and in the workplace, campaigning for Mélenchon greatly facilitates the political debate around ways to fight the capitalists. These also provide the basis for a discussion of the role that a genuine mass workers’ party could play for socialism in the period to come.

As Mélenchon’s latest poster says, “another world is possible!” We say yes, a socialist world is necessary!

Committee for a Workers’ International (CIO)

The Committee for a Workers’ International (CWI) is the international socialist organization to which the Socialist Party is affiliated. The CWI is organized in many countries. We work to unite working class and oppressed peoples against capitalism and fight for a socialist world.

A single gene controls species diversity in an ecosystem