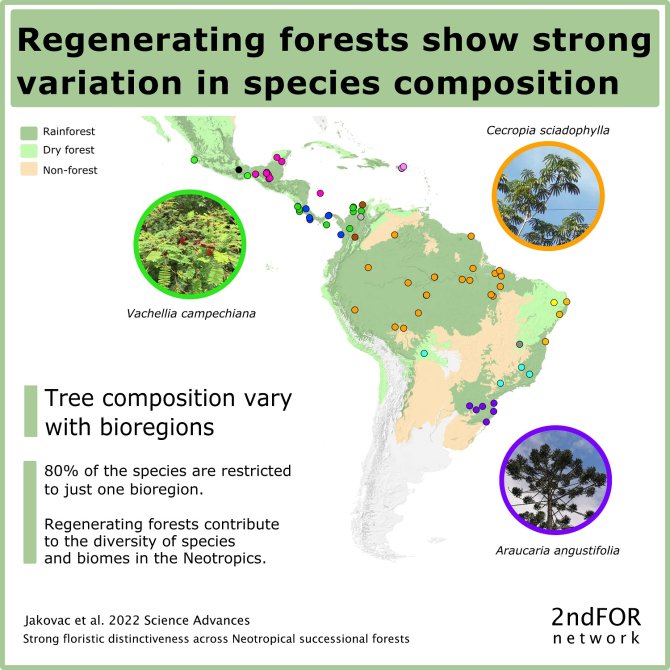 A study published today in Science Advances shows that the rainforests that naturally regrow on abandoned farmland are not all the same and therefore can help restore and conserve distinct ecological regions (biomes) across the Americas. The conservation team established 1,215 plots in young, regenerating forests from western Mexico to southern Brazil. These forests are home to a great floristic diversity, which is the combined result of evolutionary history and current environmental conditions.

This observation is surprising, because it was thought that these young forests

would be dominated by the same small set of widespread pioneer species. Lead author, Professor Catarina Jakovac from the Federal University of Santa Catarina in Brazil, explains that “pioneer species typical of young forests are generally abundant and dispersed by generalist animals, so we thought that most of them they would be able to reach distant sites like Trema micrantha and Guazuma ulmifolia.

However, the study showed that generalization is not the rule in these young forests and that 80% of the 2,164 species analyzed were present in a single floristic region. Different groups of species thrive in each region, and therefore regenerating forests can help maintain the diversity of biomes across continents.

Why are there so many species variations in these regenerating forests? The study showed that the species composition we see today is the combined result of ancient biogeographical history and recent environmental conditions. Co-author Professor Marielos Peña-Claros (Wageningen University and Research) explains that “over the course of evolutionary history, some regions have experienced an intense exchange of species with different biogeographical origins, but other regions have been separated by geographical and ecological barriers”.

For example, about 3 million years ago, the land connection between North America and South America led to a major exchange of species between Central America and the Amazon. In contrast, the Southeast and South Atlantic forest regions have a very distinct composition of Amazonian species. This is likely because they were separated by a dry region, which today is the Cerrado biome, for about 33 million years.

In addition to evolutionary history, variations in current environmental conditions lead to variations in species composition. Different floristic regions vary in terms of soil pH, temperature seasonality, and water availability. Some early-successional species, despite their ability to disperse over long distances, can only thrive under specific environmental conditions. But if these environmental conditions change, species composition can change along with it, blurring the distinction between biomes. Land use alters soil pH, and climate change leads to increased temperature and greater seasonality in water availability.

Professor Lourens Poorter, lead author of the study and based at Wageningen University, concludes that “global changes may induce, therefore, changes in species composition, potentially leading to a homogenization of these forests and reducing continental distinctiveness”.

To avoid and mitigate such consequences, forest restoration initiatives should pay close attention to species selection and prioritize local species in their restoration efforts. Jakovac points out that “This will help restore both local forests and large-scale diversity while maintaining distinct biomes across the continent.”

/Public release. This material from the original organization/authors may be ad hoc in nature, edited for clarity, style and length. The views and opinions expressed are those of the author or authors.View Full here.