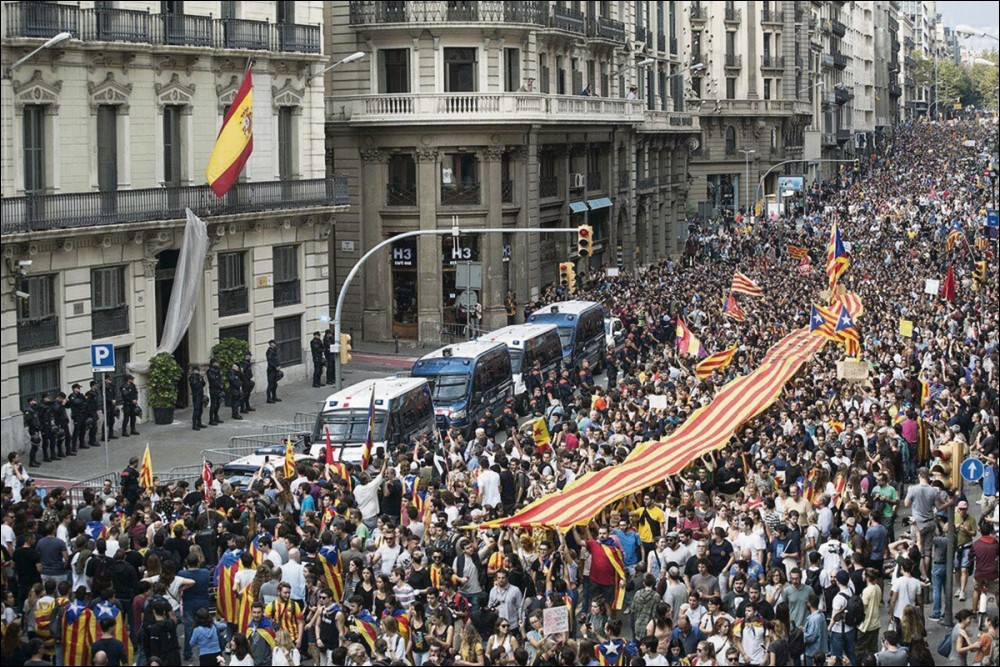 Link to this page: https://www.socialistparty.org.uk/articles/28698

The trial of political prisoners accused of organizing the October 1 referendum once again underscores the antidemocratic and reactionary character of the Spanish state and the decision of the PSOE government to disregard the democratic aspirations of the Catalan people.

By jumping on the train of reactionary Spanish nationalism, they acted as the most ardent defender of the monarchical regime of 1978.

The attorney general’s office and the attorney general’s office appointed by the government of Pedro Snchez not only approved the arguments of the PP prosecutors [People’s Party] – considering the exercise of the right to decide during a democratic referendum as an offense – but also the sentences pronounced by the Supreme Court for the accused – between 7 and 25 years of prison, as well as other sentences including the dismissal.

These decisions outraged lawyers and human rights organizations around the world. The PP and the Cs (Cuidadanos) have given the green light but the government of Pedro Snchez will go down in history as the government that allowed the execution of this political judgment, like those organized by the Franco dictatorship.

We are faced with a real legal farce. The verdict has already been delivered and the only goal is to send a message to the millions of people who voted for the republic on October 1.

This is also addressed to all those who, inside and outside Catalonia, fight the regime of 78. An attack of such magnitude can only be answered by a massive mobilization in the streets similar to the one that paralyzed Catalonia on October 1 and 3, 2017.

The best way to ensure that the general strike called on the day the trial begins (as well as the mass mobilization for the freedom of political prisoners and the recognition of the republic) achieves its objectives is to link these demands to the fight against cuts, against evictions, fuel poverty, against machismo, patriarchal justice and racism, for the creation of jobs in decent conditions, for the defense of better wages and public health and education quality.

This would broaden the battle to include not only those who fight for national democratic rights and the republic, but also young people and workers who reject Vox, PP and Cs, and who do not trust the PSOE government but also remain suspicious. towards the process because of the policies of cuts, privatizations and attacks on their rights, implemented over the years by the Catalan right of the CiU, now known as PDeCAT, and now even by the social democratic leaders of ERC in government.

For a united front of the left in favor of the struggle. Fight for the republic with a socialist program!

The government led by Torra, PDeCAT, and many Esquerra leaders, calls for freedom for political prisoners in their speeches and calls for unity in order to realize the republic in an abstract way.

In practice, however, they are doing everything possible to prevent the growth of mass movement in the streets.

Its aim is to reach an agreement with Pedro Snchez and the leaders of the PSOE and although they have made it clear that they consider the right to self-determination as non-negotiable, they allow the continuation of the repression initiated by the PP.

A successful general strike for the freedom of prisoners and the recognition of the republic linked to a plan of sustained struggle to achieve these objectives, would have a huge impact on the current social context.

A context marked by the imminent feminist general strike and the demonstrations of March 8, which will once again be massive, and by the fact that more and more workers, both inside and outside Catalonia, are concluding that faced with the empty promises of PSOE and the threat of a PP-C government with the support of Vox, the only alternative is to take to the streets and unify the struggles for all our rights and demands and against all forms oppression: gender, race, national, class. ..

It is therefore essential to build a single left front: CUP, CDR, alternative unions, the base of the ANC and the mnium, the sections of Podemos and Catalunya in Com.

Everyone must be ready to fight for the republic alongside feminist and student organizations … A united front that can rule out right-wing sections within the movement that want to stop the fight.

We must arm the movement with a socialist program. The Catalan republic for which we are fighting is not a republic where everything remains the same, the republic for which we are fighting is a socialist republic of workers and of the people, which achieves a true national and social liberation and puts an end to all the evils of society and the forms of oppression that capitalism imposes on us.

From Esquerra Revolucionria (Catalan revolutionary left) we support this strike and call for the widest possible, determined and generalized mobilization.

The leaders of the ANC and the mnium, as well as those of unions like IAC, CGT, COS … must also support this and put all the necessary means behind to ensure maximum support.

At the same time, the leaders of the CCOOs and the UGT of Catalonia must be forced to stop looking away, they must break with their policy of pacts and unequivocally join the call for a general strike and struggle for the defense of democratic rights, including the recognition of the republic for which the people of Catalonia voted on October 1.