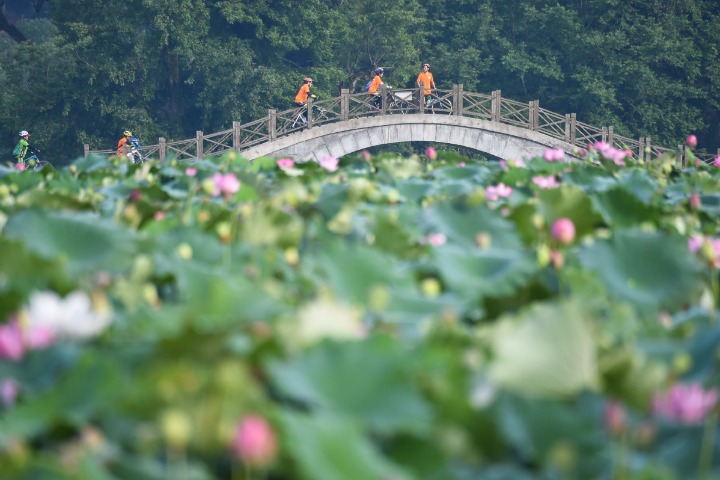 Efforts to safeguard ecology and the environment are bearing fruit

As far back as Zhu Qinggui can remember, the forests near his home have provided a rich abundance of firewood for cooking, heating, and drying the lotus seeds that his family cultivates as their main source of income.

Explaining his lifestyle, the 49-year-old quotes a Chinese proverb that reads: â€œIf you live near the mountain, you try to make a living from it.

The proverb has held firm for the family, who live in Dayuan, a village in Sanming, Fujian Province.

However, with the recent enforcement of a logging ban in the village, the family ditched wood stoves and turned to liquefied natural gas and electricity for cooking. Local authorities offered a one-time grant of 500 yuan ($ 75) to buy new cookers, and each family member 20 yuan per month to cover additional costs.

Electric machines for drying lotus seeds have been promoted in the region to replace wood-fired ones, an initiative widely welcomed by farmers, as the new machines have proven to be much more efficient and can produce much higher quality seeds.

Meanwhile, the many lotus farms located in the terraced fields of Zhu Village are emerging as a tourist attraction, with more than 50,000 such visits made so far this year.

As tourists crowd the local roads when the lotus plants bloom, Zhu and his fellow villagers were able to sell their produce at much higher prices than in previous years.

â€œThe government has repaved the roads and built new public facilities to accommodate the influx of tourists. We deeply appreciated the words ‘green mountains and clear waters are invaluable assets.’

Zhu’s family is just one of many in Sanming to directly benefit in recent years from the campaign to strengthen the local ecology and environment.

Protection efforts, including measures to protect forests and reduce pollution from industries, have paid off, with tourism now an important pillar of the city’s economy. During the National Day earlier this month, Sanming received 4.22 million tourist visits, and during this period, the industry generated 2.47 billion yuan in revenue.

City officials said they were inspired by President Xi Jinping’s long-standing emphasis on ecological and environmental protection, including comments he made during his 11 visits to Sanming as he was one of the main provincial officials.

During a visit to the city in April 1997, Xi, then deputy secretary of the Fujian Communist Party of China Provincial Committee, told local officials that “green mountains and clear waters are invaluable assets.”

He said it was important for regions such as Sanming to devise viable plans to explore mountain, river and farmland resources.

On another trip to the city in June 2002, when he was governor of Fujian, Xi stressed that environmental development was of paramount importance.

He said at the time that it might seem like green mountains and lucid waters are of little value, but in the long run, they are invaluable assets. He also urged local authorities to strive to transform economic growth and avoid wasting resources and damaging the environment.

During his subsequent tenure in Zhejiang Province, Xi continued to stress that “green mountains and lucid waters are invaluable assets”, the concept becoming well known and summed up as the “two mountain theory”.

The concept was spelled out in Xi’s report to the 19th National Congress of the Communist Party of China in 2017 to guide national campaigns to protect the environment and ecology.

Liu Xiaoyan, head of the Sanming forestry bureau, said Xi’s vision played an important role in promoting the reform of the city’s forestry sector, a key component of environmental protection and ecology. local.

To carry out Xi’s instructions, the authorities explored a number of reform measures, including taking measures to encourage farmers to transfer their timberlots to forestry cooperatives and other operators, and granting more loans to forestry companies to solve their financial problems, said Liu.