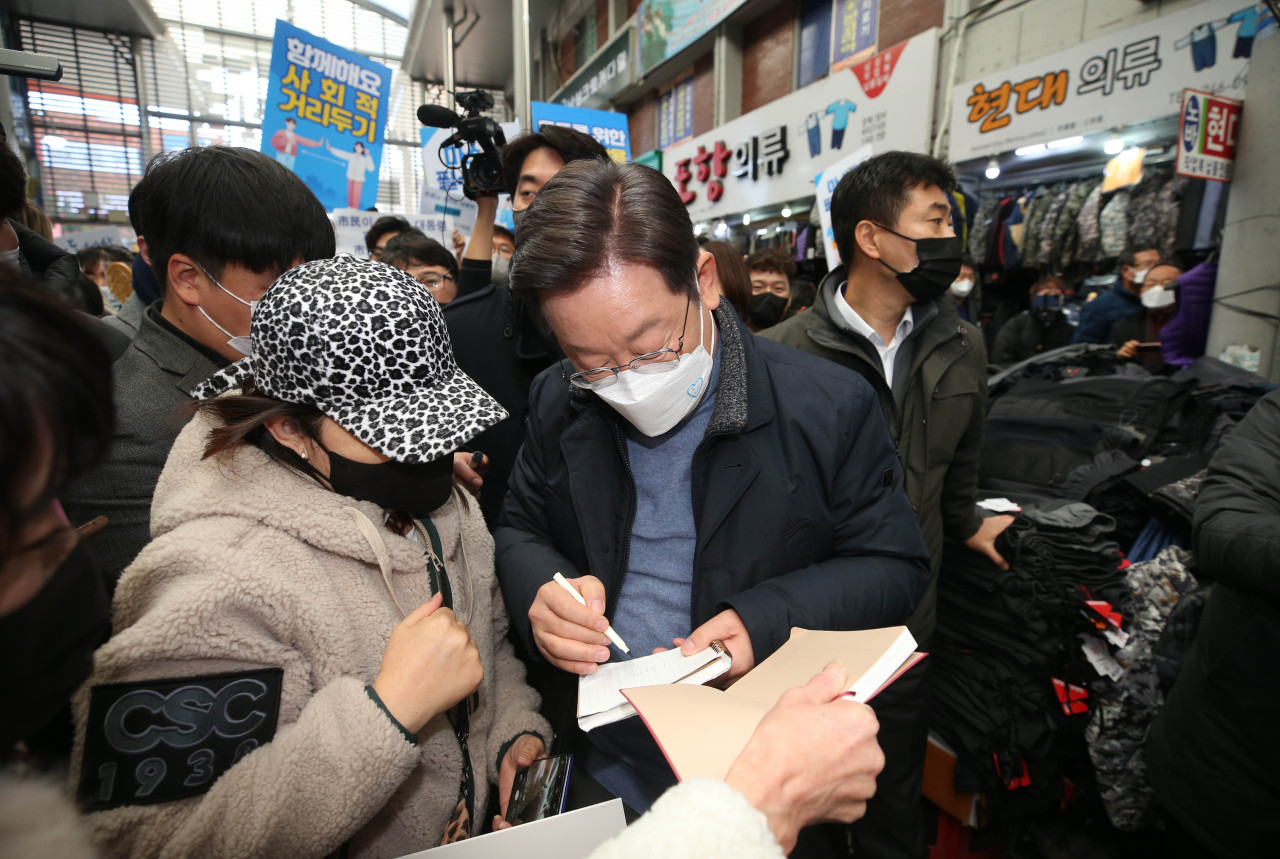 On Wednesday, ruling Democratic Party of Korea presidential candidate Lee Jae-myung tested negative for COVID-19, after coming into contact with an infected person over the weekend. Lee had canceled the activities planned the day before. He visited the Boramae Medical Center, where COVID-19 patients are treated, on Wednesday.

As political parties across the aisle criticize the incumbent government’s handling of the spread of the virus, concerns are being raised about the door-to-door campaign of the candidates themselves.

As for the ruling party candidate, he got in touch with a regional party official who tested positive on Saturday when he visited North Gyeongsang province on a four-day regional scouting trip. Lee took the COVID-19 test on Tuesday, after the official tested positive.

On December 8, a crowd of supporters, passers-by and journalists packed Daehakro Street in Seoul as Yoon Suk-yeol, the presidential candidate of the main opposition People Power Party, went to greet residents and students from the region.

It was the same day that the number of daily patients registered over 7,000 for the first time.

As party officials at the site held signs such as “social distancing in place,” “COVID-19 warning, no handshakes,” that couldn’t stop people from rallying around the candidate.

It would have taken around 20 minutes to cover around 400 meters and supporters were seen chanting Yoon’s name.

In front of a Christmas tree set up in a park, he held a selfie event to take photos with supporters, with a long line of people waiting.

Similar views of candidates leading large crowds of people are repeatedly recreated, as they move to greet people outside, without any prior process to check if those there are vaccinated.

When Lee repeatedly visited traditional markets in Jeolla and Gyeongsang provinces as part of his regional canvassing, onlookers, supporters and party officials also gathered around the candidate.

“We will hold a meeting with the government. Lee and the Democratic Party will act immediately to maintain the enduring spirit of the Liberal government against the crisis,” he said.

The leader reiterated the party’s commitment to creating an emergency COVID-19 reserve fund to support small business owners, and also led discussions on compensation measures for those who suffer the side effects. vaccines.

In order to approach voters without coming into direct contact with them, candidates are actively using live-streaming social media platforms.

On Wednesday, Lee was scheduled to appear on his YouTube channel to answer questions posted on his campaign website, dubbed “Jae-myung’s Village.”

Yoon also launched the second season of his YouTube livestreaming show “Suk-yeol TV” on Wednesday to approach and communicate more directly with the public, the party said.

The candidate will appear on the show every Wednesday evening at 9 p.m. to discuss his campaign commitments and various other issues, the party added.