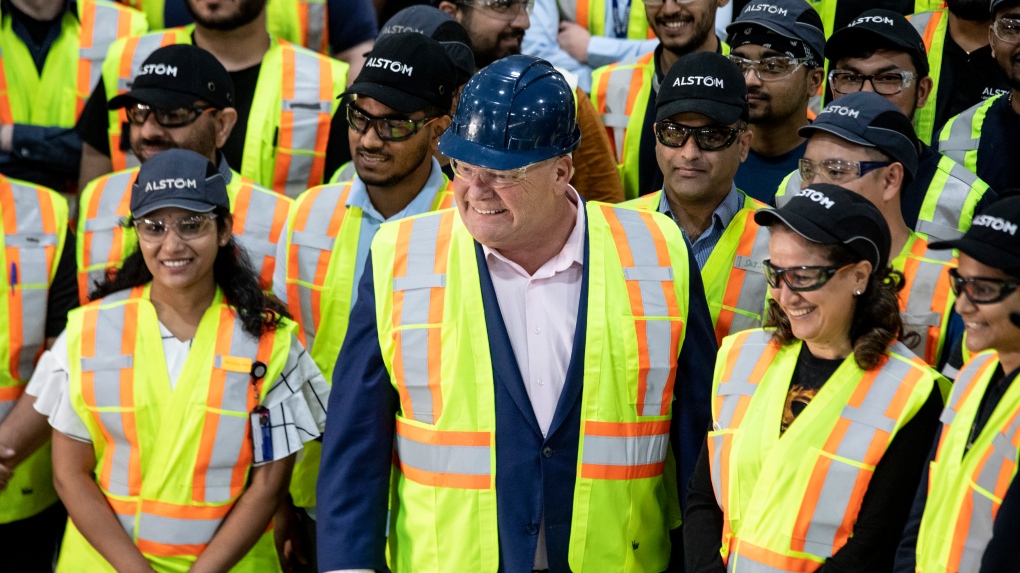 “Doug Ford is a builder,” a host read to the audience at a recent election debate in Ontario that asked the leaders of the three major parties to submit biographies of themselves.

It’s an image the Progressive Conservative leader has worked hard to portray as he asks voters to re-elect him as prime minister.

He jumped into a construction vehicle and drove it back and forth for a photo op. He wore hard hats during campaign announcements and during jobsite photo shoots with tradespeople.

Months earlier, Ford drove through his Toronto neighborhood during a blizzard, intervening with a small red shovel – a viral image that has been mocked and criticized by some, but ultimately speaks to Ford’s political approach , said political scientist Peter Graefe of McMaster University.

“The idea that he’s there to help and make a difference is his way of doing things,” Graefe said in an interview.

Now, four years after the Tory leader secured an election victory over Kathleen Wynne’s Liberals, Ford is campaigning on a similar brand with equally limited media access, despite now having a record in office. (The Canadian Press did not obtain an interview with Ford for this story.)

At a recent press conference, Ford said he had been accessible to the media during the campaign while prioritizing meetings with real people, who he said are receptive to his party’s plans to boost the campaign. ‘economy.

“I think people see it, I hear it, we have the momentum there,” he said.

Ford’s direct mode of leadership — meeting with residents and solving problems himself — likely stems from his background as a family business businessman and municipal politician, Graefe said. Ford and his late brother, controversial former Toronto mayor Rob Ford, emphasized ‘doing politics straight’ when on city council, giving out their cell phone numbers to anyone who wanted them and hosting barbecues in their family’s backyards.

The 57-year-old father of four always comes across as an approachable guy who is a text or a call away. Karl Baldauf, who worked with Ford as his Treasury Board president’s chief of staff until December 2020, said that was authentically how it operated.

Baldauf, now vice president of public affairs firm McMillan Vantage, described Ford as having a keen sensitivity to his constituency’s concerns. In an interview, he recalled that Ford would invite him and other political staffers to meet him at the Perkins Bakery in west Toronto for conversations about the provincial budget.

“I think he wanted to allow us to physically step out of the Queen’s Park bubble, so that we could be in a more conducive setting to have a more relaxed conversation about some of these really important public policy issues, and I appreciated that,” he said.

Since Ford was elected in 2018, there have been notable shifts in his policies and style – including a transition from a small government advocate keen to cut spending to a leader whose government is delaying balanced accounts with the biggest spending plan ever. deposited in the history of the province.

This change may not matter at all, Graefe said, because Ford’s brand and “particular charisma” are strong enough with its base that many people believe at this point that it is it’s a small government, no matter what it actually does.

Even so, Ford’s popularity plummeted after his government’s first budget, which was defined by controversial cuts to spending on health, environment, social programs and the arts, and by patronage scandals after that it was revealed that people close to Ford – the former chief of staff – had received lucrative appointments.

The opportunity for a rebrand presented itself in March 2020 when Ford was suddenly thrust into the position of a leader who needed to guide people through an unprecedented crisis.

Baldauf said he saw a change at Ford during this time, describing it as a pivotal period of transition for the Conservative leader, whose government was “recalibrating” after its poorly received budget. He said Ford had come to embrace the role of “coaching” a larger team, as opposed to a more “siloed” way of governing when he was in municipal politics.

“It gave him an undeniable focus,” Baldauf said of the pandemic.

Ford’s handling of the pandemic has drawn criticism, some from Ontario residents and business owners frustrated by prolonged and intermittent business and school closures and limits on social gatherings in response to disease. Many families have called for greater accountability for those who have overseen the long-term care sector, which has been devastated by death and disease, and criticized Ford for passing legislation they say protected businesses from liability for negligent residents.

His pandemic media appearances grew more harrowing and less frequent as the situation — and opinion about his handling — worsened. Still, many people rallied around him as a leader, Graefe noted.

“Ford seemed considerate. He acted in a big way,” Graefe said. “I think for a lot of Ontarians it humanized him.”

This response may have been based on “emotion rather than reason”, Graefe noted, as in many cases “he was emotional but actually not doing what he could have done to make it better”. For example, with the issue of paid sick leave for workers, the Ford government had cut that program earlier in its tenure and delayed implementing a new program during COVID-19 before finally launching one. one over a year in the crisis that critics said had failed. of the full 10 days needed to reduce workplace transmission.

One of Ford’s defining characteristics is its desire to be loved by all, and observers have attributed this to the theme of repeated COVID shutdowns.

In trying to keep everyone happy, Ford may have had the opposite effect at times, Graefe said, when he repeatedly delayed putting in place public health measures despite warning signs- runners, only to irritate whole swaths of the population when the healthcare system twisted and shut down. became necessary.

But so far in the campaign, people’s pandemic frustrations don’t appear to be impacting Ford’s re-election chances, Graefe said, noting that people may have “integrated” their assessment of his handling of the COVID-19. Polls suggest the Tories hold a large lead, and at this point the majority government the Progressive Conservatives need to stay in power – opposition parties have said they won’t back a Ford-led minority – seems within reach.

Ontario Premier Doug Ford poses with workers before making an announcement at the Alstom plant in Brampton, Ont., Tuesday, May 24, 2022. THE CANADIAN PRESS/Chris Young

During a recent campaign stop, Ford met members at a Scarborough ping pong gym. He greeted people with a simple “Good to see you”, posed for selfies, autographed a dozen ping pong paddles, then performed a few tricks, drawing compliments from the crowd on his skills. . (Ford said he used to play with his brother, Rob.)

People generally seemed excited to see the leader, but with just over a week to go until election day, not everyone was determined to give him their vote.

University student Jeffrey Li said Ford’s response to the pandemic could have been better, particularly regarding repeated lockdowns, and he said he wanted to hear more from all major parties. on community funding plans and measures to combat affordability.

Playing a trick with Ford didn’t decide him.

This report from The Canadian Press was first published on May 27, 2022.