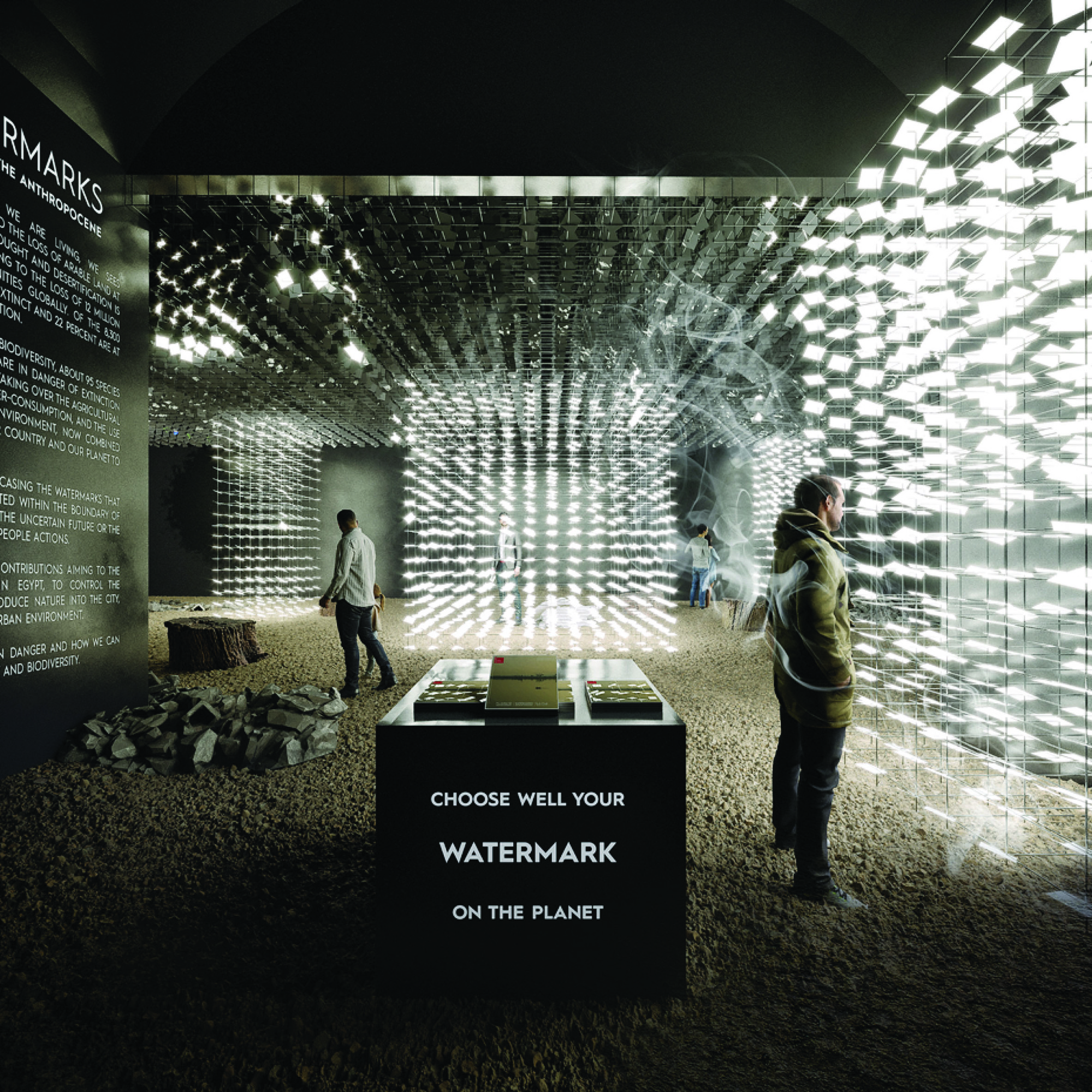 Cosmos Architecture, an international firm based in Madrid, Milan, Shanghai and Cairo designed a proposal for the Egyptian pavilion at the Venice Biennale 2020. The project is an awareness campaign, highlighting various environmental issues occurring in Egypt and presenting suitable solutions.

Addressing the loss of its biodiversity in Egypt due to rapid urbanization, population fluctuations, technological peril and climate change, the pavilion offers inputs that can restore the natural balance. In fact, in their description, Cosmos Architecture states that â€œthe pavilion is a showcase of contributions aimed at balancing ecological diversity in Egypt, controlling the expansion of the territory, and introducing nature into the city, creating a new symbiotic urban environmentâ€.

In order to re-establish a healthy balance, the conceptual approach sets up an experimental route for visitors, “an exploration trip inside this anthropocene environmentâ€. The content will be displayed inside steel mesh, to constantly arouse people’s curiosity. Steel trellises and lighting panels will come together to represent the watermarks, “lighting in the darkâ€. Really, “the small scale of these plates is a symbolic representation to show the domination of the Anthropocene effect compared to the good human contributions nowadaysâ€. Visitors will be encouraged to look for good interventions.

How are we going to live together? : Hashim Sarkis at the Venice Biennale 2020

The pavilion’s floor, dominated by hardened sand, features four main elements, each representing one of the dangers facing humanity and biodiversity. Through this concept, architects aim to open people’s eyes to what can be lost. The watermarks, representing clean and environmentally friendly technologies, are a direct response to the problems of the Anthropocene. During the pre-design research process, the architects studied the response of different locations to the effects of anthropogenic climate-related phenomena, concluding that â€œdesign for climate change comes in many different forms, depending on symptom, geographic location and needs, depending on riskâ€. Some projects aim to conserve or preserve natural habits, while others respond with the adaptive reuse of old and obsolete brownfields.

Cosmos Architecture took part in a competition organized by the Egyptian Ministry of Culture for the design of the national pavilion for the Venice Biennale 2020. The project was selected last December for the final phases of the competition.

Read on for the architects’ statement:

“Humans are the actors of an era of accelerated planetary crisis which has recently gained a new geological epoch called the Anthropocene. Based on the overwhelming evidence that human activity has established itself as a major force of nature.”

â€œIn this new era, we have seen unprecedented land degradation and loss of arable land at 30 to 35 times the historic rate. Drought and desertification are also increasing each year, representing the loss of 12 million hectares and affecting poor communities around the world. . Of the 8,300 known animal breeds, 8% are extinct and 22% are in danger of extinction. “

“Egypt is experiencing a huge loss of its biodiversity, around 95 species of plants, insects, birds and animals are in danger of extinction due to rapid urbanization invading agricultural land, changes demographic trends, overconsumption and the use of environmentally harmful technologies, now associated with climate change, are pushing our country and our planet to their limits. â€