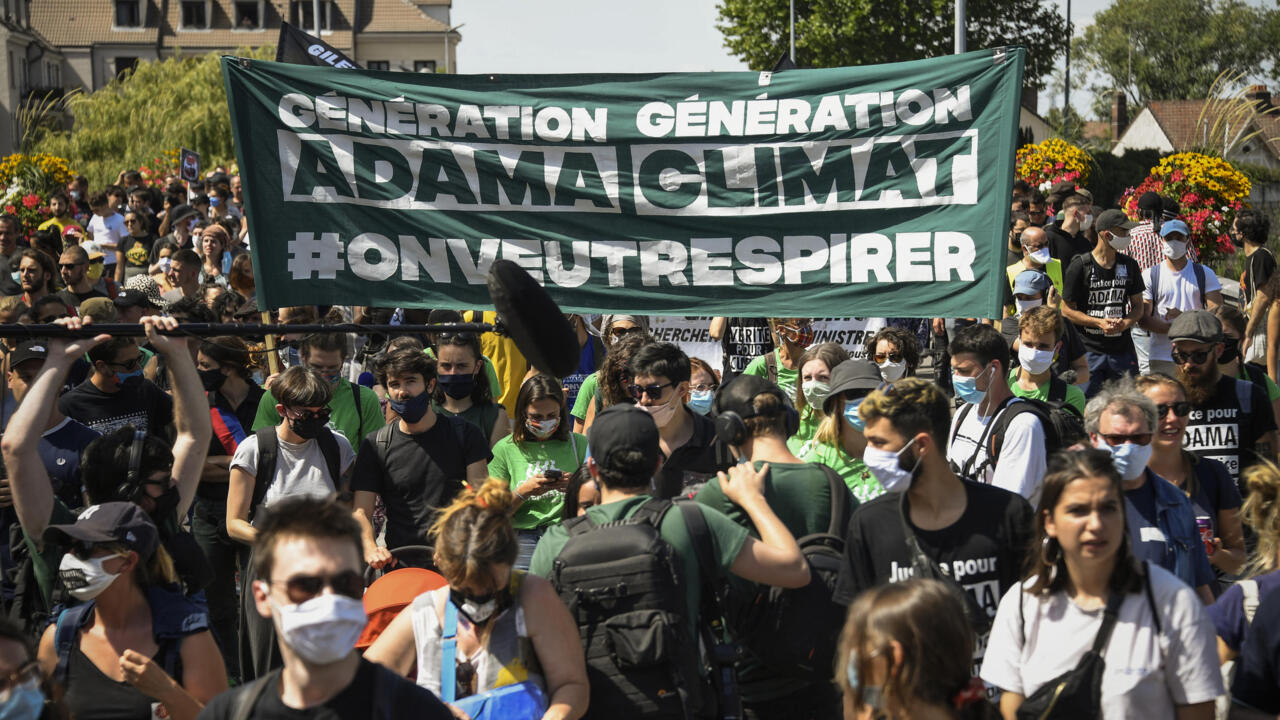 Seeking to broaden their base of support, anti-racism activists in the French suburbs are taking on the fight against human activities that poison the air, destroy ecosystems and breed deadly pandemics – which harm vulnerable communities the most.

Under a scorching sun, thousands of demonstrators marched in the Parisian suburb of Beaumont-sur-Oise this weekend, their banners, t-shirts and masks calling for justice, equality and the freedom to simply breathe .

Both solemn and festive, the rally marked the fourth anniversary of the death in police custody of young black man Adama Traore, whose case sparked widespread anger over police brutality and racial injustice in France. Protesters paid tribute to Traoré, who died of asphyxiation on his 24th birthday in circumstances that remain unclear.

The march also addressed broader grievances, and climate activists co-hosted this year’s event. Among them was Elodie Nace, spokesperson for the environmental group Alternatiba, which ferried dozens of its members from the French capital to the distant northern suburbs.

“Ours is not just an addition of groups,” she told FRANCE 24. “It’s an alliance around a common message: we want to breathe.”

‘I can not breathe’

Rarely has such basic advocacy felt as urgent as in recent months. From Beaumont-sur-Oise to Minneapolis, a perfect storm of crises has drawn attention to the most basic human needs: life-sustaining oxygen-filled air, keeps coronavirus patients breathing and whose George Floyd was fatally deprived.

In France, chilling video footage of the May 25 murder of Floyd by a Minneapolis police officer quickly evoked comparisons to the unsolved case of Traore, whose last words were also “I can’t breathe.”

Two autopsies and four separate medical examinations have offered conflicting reasons for Traore’s death in police custody, with his family claiming he suffocated under the weight of the three officers who used a controversial technique to restrain him. None of the officers have been charged, and the bubbling sense of injustice has fueled the family’s fight against racism and police brutality in France’s deprived suburbs.

“No man, no one should die like this, at this age,” said Traore’s sister, Assa, who led the family’s long legal fight.

Saturday’s large-scale march was the result of years of community organizing by the Traore family, supported by veteran anti-racism activists who joined their advocacy group, Truth For Adama, commonly known as the Adama Committee.

Galvanized by the global protest movement following Floyd’s killing in the United States, the Adama Committee drew tens of thousands of protesters to the streets of Paris last month in the largest and most diverse gatherings of its kind. in France for decades. Its protests have eclipsed those organized by older anti-racism groups, whose radical edge has been eroded by years of association with mainstream political parties.

>> As George Floyd outrage spreads, France faces its own demons

The group “succeeded in carrying countless feelings of injustice that had not yet found an outlet”, explains Julien Talpin, sociologist at the National Center for Scientific Research. “In doing so, he mobilized far beyond the circle of daily activists. ”

Since her brother’s death, Assa Traoré has traveled the country meeting bereaved families, addressing rallies, reaching out to other advocacy groups and challenging political parties to take an interest in the suburbs. Last year, she invited representatives of the Yellow Vests, a predominantly white anti-government protest movement, to the annual rally in Beaumont-sur-Oise.

While some groups, including left-wing “antifa” (anti-fascists), have become natural bedfellows, other tentative allies, like the yellow vests, have raised more than a few eyebrows in a country where rural and inhabitants of the suburbs rarely cross paths. .

Even as they search for partners, members of the Adama Committee have fiercely defended their autonomy, speaking of “alliances” rather than “convergence”. They have been particularly wary of involvement in political parties, keen to distinguish themselves from older anti-racist organizations, created in the 1980s and largely controlled by socialist and communist parties that once dominated left-wing activism.

“The Adama Committee is ready to engage with left-wing political parties, to challenge them and to provoke them, but it is careful to keep its distance,” said Talpin, noting that many left-wing parties with a French republican tradition are reluctant. to recognize the “institutionalized systemic racism” denounced by the Adama Committee.

So far, Alternatiba has proven to be a good game. Both movements are young, radical, independent and led by women. According to Nace, spokesperson for Alternatiba, they also share a “systemic approach, aiming to overcome a system of racial and sexist domination that oppresses the most vulnerable”.

“There is a common strategy and, to some extent, a shared ideological base,” acknowledges Talpin.

“On the one hand, they agree to support each other in their respective and autonomous fights,” he explains. “And on the other hand, they share the observation that the main victims of racism, pollution and climate change are the underprivileged.”

Moreover, adds Talpin, “they also believe that the mainstream left has abandoned these segments of the population and ignored the discrimination they face.”

In March 2019, when hundreds of thousands of climate activists marched through cities across France to denounce government inaction, in the country’s largest-ever climate protests, Assa Traoré chose to march separately, under the Truth For Adama banner. But she accepted Alternatiba’s invitation to address the crowd, and then returned the invitation with Saturday’s rally in Beaumont-sur-Oise.

For Alternatiba, one of the main goals of the rally was to dispel the widely held belief that environmentalism is only a concern of inner-city white middle classes.

“Ecology should not be reserved for rich, bio-eating city dwellers. It is also a question of solidarity and reclaiming one’s territory,” says Nace, noting that the poor suburbs of France, which are home to significant Immigrant and non-white populations living in cramped and neglected cities are the most affected by climate change, air and water pollution.

“The Adama Generation and the Climate Generation have come together to denounce the same system that plunders resources and pushes the most vulnerable down the ladder,” she says. “We want another society based on justice and equality, and none of this will be possible without the support of poor and working-class neighborhoods.”