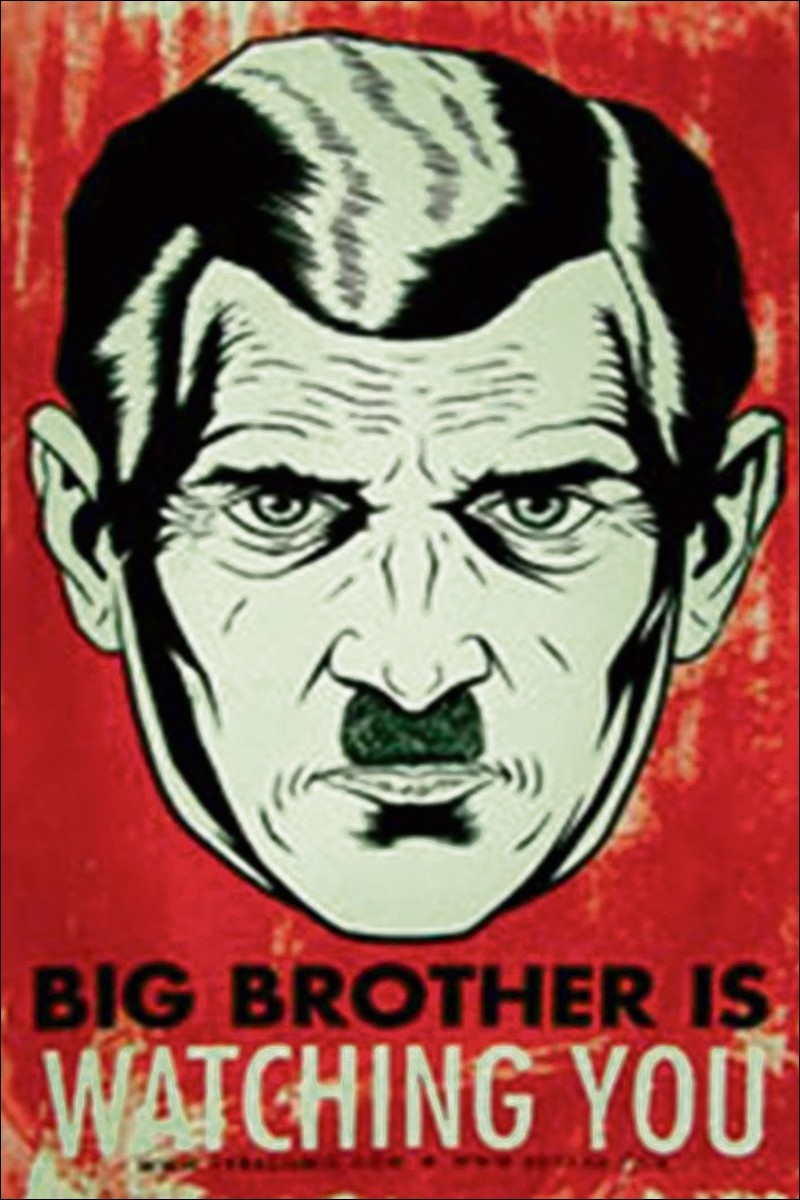 Nineteen Eighty-Four was “an outpouring of human frustration and anxiety as it moved from a world war to the cold war”, image by Frederic Guimont / Free Art License (Click to enlarge)

A revolution in Britain and America has degenerated into a Stalinist sci-fi nightmare under the figurehead of â€œBig Brotherâ€. Advances in surveillance, psychology and political science have made human will “infinitely malleable” – at least that is what the ruling “Party” maintains.

Perpetual scarcity and war, and constant espionage by the “thought police,” maintain the power of the privileged bureaucrats. Anyone can be an informant. The insane official Winston Smith rebels, joined by the young heretic Julia.

There is great entertainment. The characters may lack depth, but the sex, conspiracy, torture, and terror underpin a straightforward plot.

In truth, history is only a vessel. It was a wave of human frustration and anxiety as it moved from a global war to a cold war.

It is not an invective against socialism. â€œThe Party rejects and defames all the principles for which the socialist movement has ever defended. Nor is it an assault on technology, despite the many lazy parallels drawn today.

Orwell wrote most of the novel between 1947 and 1948. During World War II, workers around the world endured years of austerity, repression, and propaganda. Orwell also felt disappointed with the limits of the reforms of the Labor government of 1945.

Now the irreconcilable social systems of market and planned economies were stuck in a hostile impasse. Capitalism seemed exhausted, but the world socialist revolution was at a standstill after Stalinist isolation and derailment. During this time, the great powers had divided the planet into vast spheres of influence.

Winston works at the “Ministry of Truth” rewriting archival news articles to match changing Party positions. The abolition of history is a central concern in Nineteen Eighty-Four.

Marxists sometimes call the revolutionary party the memory bank of the working class. Part of its responsibility is to secure the lessons of history. In this sense, Nineteen Eighty-Four’s Party is a pure inversion, imagined as the logical perfection of the airbrush of Stalinism.

In his lifetime, Orwell has exposed the lies of the Moscow show trials – in fact, any political distortion. He had also worked for the BBC during the war. The novel’s infamous torture chamber, “Room 101”, was the location of the military censor at Broadcasting House.

In the novel, other ministry staff are producing propaganda or working on the official ‘Newspeak’ language. This destroys and perverts the vocabulary “to narrow the field of thought”, another theme.

In his provocative 1946 essay Politics and the English Language, Orwell argues that direct and meaningful language helps prevent “dumb” political thought, while dishonest political language encourages it. Nineteen Eighty-Four argues the same in the negative.

This is too often presented as a crass claim that the tongue itself can set free or imprison. In fact, the novel dismisses the “pun” as capable of controlling mass thought – misery and repression are essential.

But combined with the erasure of history and the mystical self-delusion of “double thinking”, the Party is certain that the Newspeak will put an end to “crime of thought”, at least within the bureaucracy. Of course, like all aspects of the cartoon world that Orwell portrays, this is controversy, not prophecy.

So what force can prevent it? “The proletarians, if only they could somehow realize their own strength,” Winston thinks.

However, Nineteen Eighty-Four also seems deeply cynical about the ability of workers to grasp and overcome their position in the company. The “proles” are cartoonish and desirable fools – both in the eyes of the Party and in Winston’s experience.

It has nothing to do with the real working class. But it is not a particular mental or moral faculty that empowers workers to effect change. This is their role in the mass production of goods and services. Collective action by workers can shut down society, and the workplace breeds collective consciousness and organization.

The main satirical target seems to be the self-righteous and fanatical egos that populate the Party. Indeed, in a letter from 1944, Orwell complained that English intellectuals “are perfectly ready for dictatorial methods, the secret police, the systematic falsification of history”.

In another 1946 essay, James Burnham and the Managerial Revolution, Orwell worried about the “cult of power now so widespread among intellectuals.” Senior Party official O’Brien simply maintains that “the object of power is power”.

So maybe Nineteen Eighty-Four instead warns those place seekers who are bypassing the working class, or looking for shortcuts to changing society: be careful what you want.

In fact, the whole barbaric project fails. The novel’s appendix on Newspeak Principles is written from an undisclosed future epoch that views the glaring contradictions of this bygone society as untenable.

So Nineteen Eighty-Four believes that a better future is possible, or at least that the tyranny of the police state will not last. He simply does not see any clear path forward.

Orwell’s own political views were intelligent but impressionistic. He was a staunch opponent of Stalinism, but not a Trotskyist.

He did, however, support certain Trotskyist initiatives and read the British Trotskyist newspaper of the time, Socialist Appeal. Winston even seeks out supposed resistance, followers of “Emmanuel Goldstein,” an open analogue for the person (if not quite the approach) of Leon Trotsky.

Orwell had been a revolutionary fighter in Catalonia, but was falling more and more into political demoralization. Too bad Winston’s world didn’t have workers like the ones Orwell fought in the Spanish Civil War.

And it’s a shame that Orwell did not penetrate the social and material substance of world events as deeply as he did in their language and psychology. Nonetheless, his characteristic lucid prose conveys firm, jolting ideas like a rivet gun.

Nineteen Eighty-Four’s cry of desperate individual challenge against the surging waves of vast impersonal forces resonates with many today. He gave us a lexicon of authoritarianism, the abuse and abuse of which testify to his insight.

And despite the novel’s pessimism, Winston is right: the workers have power. Whether it is taking wealth away from the capitalists or ousting a repressive bureaucracy, all they have to do is “rise up and shake themselves like a horse shaking flies.”

Conservatives deny misery … look around! Get rid of the conservatives

Strike together to kick out the Conservatives!

Fighting to stop the privatization of school meals

UCU Conference 2019: Preparing for the fight

70 years since the publication of Nineteen Eighty-Four: “But if there was hope, it lay in the proles”

Tens of thousands march against Trump

South Yorkshire: No to cuts to firefighters!

LS26 campaign lobbies council to save their homes