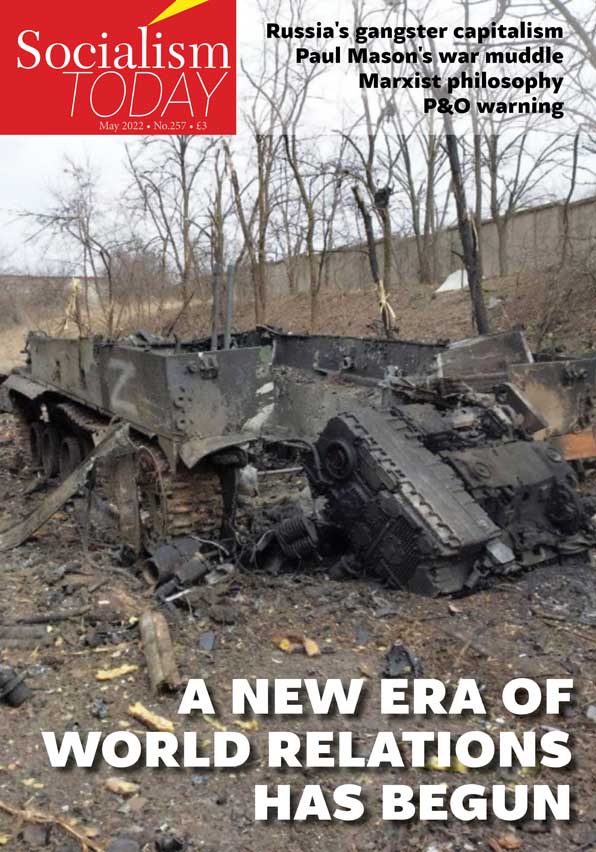 A new era of global relations has begun

Certain events become iconic when they are then perceived as the representative synthesis of a new turning point in social, economic or political evolution. The fall of the Berlin Wall is an example. It symbolizes the collapse of Stalinism in Russia and Eastern Europe and the end of the Cold War framing global power relations such as those between competing social systems: capitalism in the West and non-capitalist Stalinist states in ballast.

The rotting of Stalinist regimes under the internal contradictions of totalitarian rule – the opposite mirror of workers’ democracy – had been a protracted process as bureaucracy moved from relative to absolute hindrance to the economy and society. But that has not diminished the importance of the drama of November 1989. And although it is also the product of underlying and ongoing processes, the Russian invasion of Ukraine on February 24 will also be seen as a another pivotal moment in history.

War, however ended, has already upended the global architecture of treaty organizations, diplomatic conventions, etc., built over the past 30 years. This international machinery has either been recast from the institutions of the Cold War era (the GATT became the World Trade Organization, for example) or has supplanted them (the G7 and the G20, the International Criminal Court, the summits of the COP). Together they were the medium through which the conflicting interests of the world’s most powerful capitalist nation-states (and the formally “non-market” Chinese regime) were mediated in the post-Stalinist world.

This liberal international “rules-based system” has sustained the hegemony of US imperialism in the new millennium. It opened world markets to unrestricted access to American capital in particular, under the banner of “globalization”. The role in the new global alignment of the now capitalist Russian Federation, the international legal successor of the USSR, was that of an “oil power”. It became a major producer of raw materials in the global economy, especially hydrocarbons and food and agricultural products, but not then a disruptor of the American order.

Even then, however, the United States’ moment as an undisputed superpower was historically brief. It was gradually destroyed by 9/11, the imperial reach of the Iraq War and the financial crisis of 2007-08 – and in turn replaced by an increasingly multipolar world. The United States was still the leading economic and military power, but in a now contested world.

This included the newly established Russian capitalist class. As he consolidated his position, he moved from his initial obsequiousness towards American imperialism in the first period of the restoration of capitalism to an assertion of his own imperialist interests, especially in the “near abroad” Russia, Georgia, Transnistria in Moldova, Armenia and Azerbaijan – and Ukraine.

Today, at a time without global hegemony and with a great world power trying to settle the underlying conflicts not by diplomacy but by force of arms, a new phase is beginning, internationally and in Great Britain. Britain too.

The tasks of the Marxist press at this juncture must be both to analyze the class processes and interests involved and to work out a program that can help prepare the working class and its organizations for the challenges ahead.

Stalinism was not an example of true socialism, which means the democratic control of society by the working class and not the dictatorship of a privileged bureaucracy. But the planned economy of the Stalinist states – with private ownership of the dominant sectors of industry and the imperatives of restricted market relations – saw enormous economic progress made for a whole historical period, even under the rule of bureaucracy. .

There are many different figures to illustrate this, but even the ideologically pro-capitalist magazine Economist, on the centenary of the 1917 Russian Revolution, had to acknowledge that if “the rest of the world was wallowing in depression” from In the interwar period, manufacturing production in the USSR increased by more than 170% from 1928 to 1940 (November 11, 2017). They also conceded that at the peak of Russian Stalinism’s economic development relative to the capitalist world in the 1960s, “when USSR Prime Minister Nikita Khrushchev said to the West ‘we will bury you’, the threat seemed credible” (December 15, 2018).

The collapse, when it happened, took on catastrophic proportions. There was arguably a greater reversal of economic fortunes than that experienced by Germany in the aftermath of World War I, which saw the world’s third-largest economy in 1914 lose its colonies and endure the onerous terms of the Treaty of Versailles.

From 1991 to 1994, life expectancy for Russian men plummeted by five years as the “shock therapy” of mass privatization was unleashed. The Russia of the 1990s went from being the center of the world’s second largest economy – the USSR was even until 1985, when the ossified bureaucracy was increasingly unable to develop a modern advanced economy – to its current state (pre-Ukraine). invasion) position of twelfth. From an economy half the size of the United States to one-thirteenth the size (IMF 2019 ranking). But still weighed down by the world’s third- or fourth-largest military budget, and spending on nuclear weapons ($8.5 billion in 2019) is still a quarter of that of the United States ($35.4 billion).

Russian capitalism which has since developed on the ruins of Stalinism is in reality an armed oil state resting on chicken legs. But it is still a capitalist state that defends capitalist interests, not those of the working class or the national rights of the peoples of the region.

In his review of this edition of Socialism Today [May 2022] of Putin’s People, a recent book tracing the rise of Russian President Vladimir Putin’s brutal regime, Peter Taaffe explains how the collapse of the planned economy hastened the formation of a new capitalist class made up of former bureaucrats, senior managers, traders, financiers, organized crime groups – and sections of the former Stalinist secret police, the KGB, with underage ex-agent Putin “completely at home” as he rose to power in “this murky and violent world “.

The primary interest of this new emerging capitalist class was personal enrichment. They were, and still are, rent grabbers, especially the $4 trillion in oil and gas exports that have flowed through Russia in the past two decades alone.

American imperialism, but also German capitalism through its dominant position within the European Union (EU), was seeking its share. ‘Londongrad’, under New Labor and the Tories, played its part in helping the oligarchs launder their spoils.

Meanwhile, new elites similarly emerging in the former Stalinist states of Eastern Europe and the former countries of the USSR – mini-me gangster capitalists all – gravitated either to the United States and the United States. EU (and within the EU or US-dominated NATO alliance). generally sought the harshest measures against their Russian counterparts) or remained with varying degrees of consent within Russia’s “sphere of influence”.

To assert their imperial interests in this situation, but also to counter centrifugal forces within the Russian Federation from the Urals, Siberia, Tatarstan, North Caucasus and elsewhere, the Russian state in the process of consolidation has decided to strengthen its apparatus. He developed an appropriate “Greater Russia” ideology in an attempt to legitimize his rule. And he looked for opportunities to unfreeze the world order established after the collapse of Stalinism.

These are the great fundamental underlying causes of the February 24 invasion and the terrible suffering inflicted on the people of Ukraine today. They are detailed by Tony Saunois in his article for this edition. [the May 2022 issue of Socialism Today]responding to radical journalist Paul Mason’s muddled arguments about the “progressive” side of the war.

You have to fight your way through the fog of war. The economic consequences of the Ukrainian crisis alone, in addition to the effects of the pandemic, will usher in a new tougher battle between the classes, including in Britain, as Hannah Sell’s article explains. [in the May 2022 issue of Socialism Today].

A new era of global relations has begun. Despite the great disparity between the two, the conflict between the Russian state and US imperialism and its NATO instrument is a clash between rival imperialisms, with no “side” offering anything to the working class. The task of building the forces of world socialism has become more and more urgent.