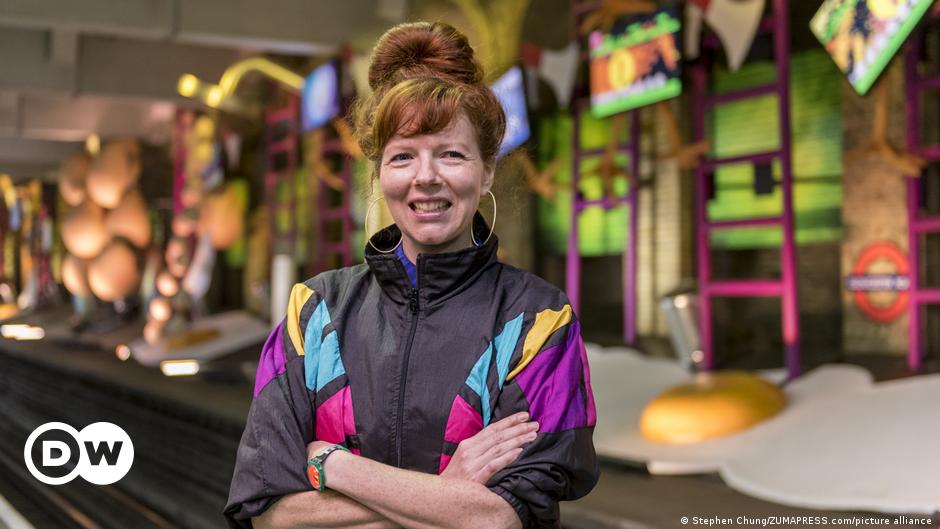 Born in London in 1976 and socialized in the British rave scene of the 1990s, Heather Phillipson presents “Rupture No 6: biting the blowtorched peach”.

In this new version of her 2020 commission for Tate Britain, she evokes what she calls an “unsuitable ecosystem, an immersive atmosphere”.

His installation at the Tate Liverpool mixes colors, videos, sculptures and new sound compositions that evoke a parallel universe. She describes the collision of different materials and media as “quantum thought experiments”.

Ingrid Pollard was born in Georgetown, Guyana in 1953. She works as a photographer and is closely associated with the British photography agency Autograph, the Association of Black Photographers.

In her work, Pollard explores social constructions such as national identity, sexuality and racism through portrait and landscape photography, while also using sculpture, film and music.

For the Turner Prize exhibition, she presents “Seventeen of Sixty-Eight”, for which she has spent decades investigating representations of “Africans” on pub signs, everyday objects and in literature.

“Bow Down and Very Low — 123” includes three kinetic sculptures and everyday objects that reflect the power dynamics of society, while the photo series “Deny: Imagine: Attack” (1991) and “Silence” (2019 ) explore the language of power.

Born in Montserrat in the Caribbean in 1956 and raised in London, Veronica Ryan is a well-known British sculptor living between New York and Bristol.

She uses a wide variety of materials – from clay and bronze to feathers and fishing nets – to represent displacement, fragmentation and alienation.

With titles such as “Multiple Conversations” or “Along a Spectrum”, his works offer different layers of meaning and interpretation.

During a stay on the former Irish prison island of Spike Island, she created sculptures from real objects such as fruit, food containers, feathers and paper, then designed them in order to show the ecological and historical context of migration and the psychological consequences of the COVID pandemic.

Born in Canada in 1991, Sin Wai Kin is the first non-binary person to be nominated for the Turner Prize. The artist brings fantasy to life through films and drag performances influenced by personalities ranging from Jessica Rabbit to Marilyn Monroe.

Sin’s work challenges traditional notions of gender in spaces traditionally occupied by white, male, and straight perspectives. The artist aims to “interrupt normative processes around questions of desire, identification and objectification,” according to the Tate website.

The shortlisted artist presents three films for the Turner Prize, including “A Dream of Wholeness in Parts,” in which traditional Chinese philosophy and dramaturgy meet contemporary drag, music and poetry.

In “It’s Always You,” Sin stars as four boy band members and in “Today’s Top Stories,” the artist portrays a news anchor who delivers existential monologues about consciousness, naming, and life. ‘identify.

“I am delighted to unveil the work of these four outstanding artists at Tate Liverpool for this year’s Turner Prize. They are a diverse group of artists, each with a singular vision, all of whom deal with important issues our society faces today and together. Their work combines to create a compelling and dynamic exhibition,” said Helen Legg, Director of Tate Liverpool and Co-Chair of the 2022 Turner Prize Jury, in a statement.

The winner of the 2022 Turner Prize will be announced on December 7 at St. George’s Hall in Liverpool.

This article was originally written in German.

How plant diversity in Germany has changed over the last century