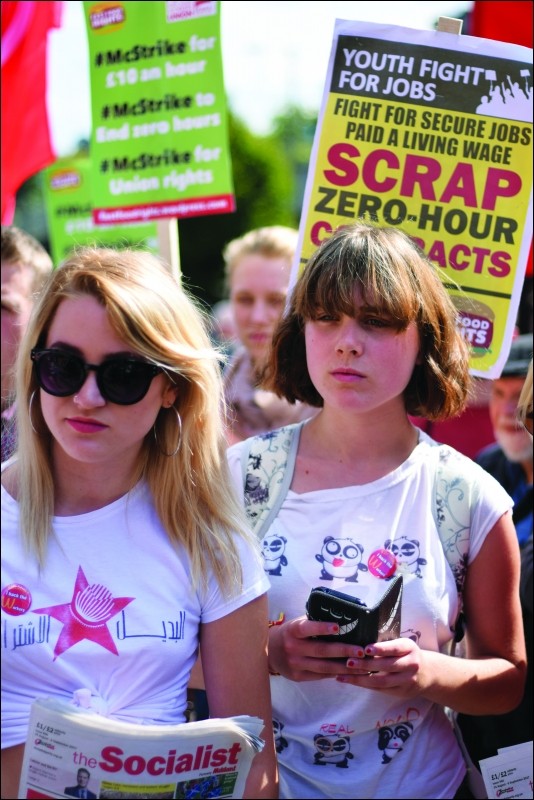 Strike to win a secure job!

The number of zero hour contracts in Britain has increased by 100,000 in just one year.

There are now 1.8 million zero hour contracts, as the latest Labor Force Survey from the Office for National Statistics shows. With many others on short-term contracts of four to twelve hours, it’s clear that bosses are continuing their road to precarious work.

The bosses tell us that the workers appreciate the flexibility offered by these contracts. The reality is that this is flexibility only for the bosses.

When the average work week for someone with a zero hour contract is 26 hours, it is clear that workers are taken for a turn; denied the fundamental rights for which the labor movement fights.

Last year, the Conservative-commissioned Taylor Review of Labor Practices made some minimal suggestions to improve the lives of hourless workers. This includes a higher minimum wage for non-contractual hours and the right to request a contract reflecting the hours actually worked.

But even these small demands seem too much for the bosses, so they met a stony silence from the conservatives.

At its recent annual conference, the Usdaw retail union voted unanimously to campaign for the abolition of all zero hour contracts and to replace them with 16-hour minimum contracts, except when workers demand less. It would be a step towards the reversal of growing underemployment and precarious work.

However, these requests cannot be just words. We cannot expect to simply ask the bosses and their politicians nicely and hope that they will give in.

Workers need determined action from the whole trade union movement to win these fundamental demands. The example set by the McDonald’s strikers should inspire all workers in industries plagued with short, zero-hour contracts to demand action against them.

We must build a bold movement that campaigns for at least Â£ 10 an hour as a minimum wage with no exemptions; which campaigns against all precarious work practices, to guarantee decent and well-paid jobs for all.

Windrush: Rudd resigns. May and the Conservatives must go

200 years of Karl Marx: Marxist ideas more relevant than ever

May Day McStrike: “A symbol for all workers”

Stop Trump! Build for walkouts and mass protests on July 13!

Parents and activists protest cuts to disabled travel in Leeds

TUSC is causing a stir in Haringey

Groundswell of support for TUSC in Huddersfield

Catalonia: thousands in the streets

Malta: insult from right-wing Labor leader on May 1